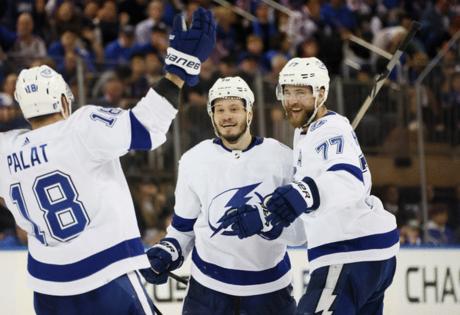 NEW YORK — The third period has been winning time for the Lightning this postseason. It’s when inspiring words are spouted in the locker room, and champions play like they’re chasing their first Stanley Cup.

The Lightning went into the third period of Thursday’s Game 5 of the Eastern Conference final deadlocked at 1, before the late-game heroics struck again.

Defenseman Mikhail Sergachev, who entered the night with no postseason goals, scored the tying goal in the second period and assisted on the the winning goal with 1:50 remaining to help give the Lightning a 3-1 win and a 3-2 series lead.

Sergachev almost had a second goal. His shot from the point went through a screen created by Ondrej Palat, who was credited for the score that quieted Madison Square Garden.

Down 1-0, Sergachev’s seeing-eye wrist shot from inside the blue line beat Rangers goaltender Igor Shesterkin and found the back of the net to tie the game with 2:26 left in a second period that saw the Lightning outshoot New York 13-8.

Brandon Hagel added an empty-net goal late in the third.

Midway through the second period, Rangers defenseman Ryan Lindgren scored the game’s first goal, collecting a puck that was rimmed behind the net by Zach Bogosian and taking a tight angle shot that beat goaltender Andrei Vasilevskiy high over his blocker side.

Vasilevskiy didn’t face an incredible shot volume, but was on his toes for most of the game as the Rangers provided pressure up close. Vasilevskiy made a remarkable skate save on Artemi Panarin in the first, and turned away the Rangers in front of the net several times. Vasilevskiy also cut off a bouncing puck that found Andrew Copp’s stick from behind the net along the back post midway through the third.

The Lightning had their opportunities in the second, including six shots on goal over four minutes of power-play time, but came away with nothing until Sergachev’s goal. Forward Riley Nash also hit the near post in 5-on-5 play in the second.