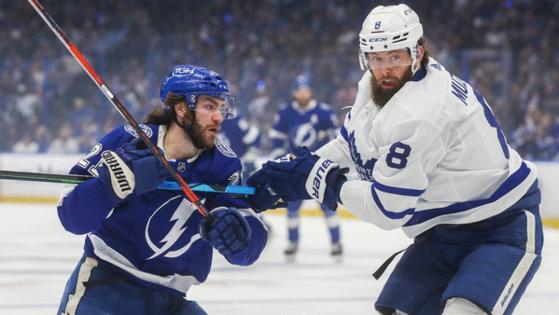 TAMPA, Fla. — Steven Stamkos knows what it’s like having to watch while teammates chase greatness.

“The worst feeling as an athlete is not being able to perform, especially at this time of the year,” said Stamkos, who missed all but 2 minutes, 47 seconds of the Lightning’s 2020 run to the first of back-to-back Stanley Cup championships with a core muscle injury.

Center Brayden Point was injured in Game 7 of this year’s first-round series against the Maple Leafs and remains out. Point, who led the league with 28 goals over the past two postseasons, was the Lightning’s top two-way performer against Toronto before his injury, neutralizing 60-goal scorer Auston Matthews and scoring the deciding goal in a must-win Game 6.

Late in the first period of Game 7, Point was chasing the puck on the forecheck. As he turned toward the boards, he lost an edge and his right leg twisted awkwardly under his body. He was in tremendous pain as he held his upper leg. He struggled to get to the bench, and he couldn’t get any power from his legs without pain when he tried to return in the following period. The team is calling it a lower-body injury.

Almost two weeks later, Point doesn’t appear close to a return. Coach Jon Cooper initially said Point was day-to-day but has since backed away from that assessment. Point is aiming to return — teammates say he’s working out — but he has yet to resume skating with the team, an indication that he’s more week-to-week than day-to-day.

“He’s a huge part of our team, and he’s a big presence in the (locker) room, too,” defenseman Mikhail Sergachev said. “He’s fun to be around, and whenever somebody goes down, they’re always with the guys and they’re always part of the team.”

The Lightning’s layoff before the start of the Eastern Conference final — the second-round sweep of Florida ended Monday, and the second-round series between the Hurricanes and Rangers won’t end until at least Saturday — helps the likelihood that Point can return during the postseason.

The Lightning’s attitude is that the longer they play, the better the odds that Point can return.

“We know how important he is to our team and the caliber of player that he is and what he’s done in these past couple of (Cup) runs,” Stamkos said. “We just hope there’s enough time for him to get back and play this playoffs. We’d all love to see ‘Pointer’ back on the ice and be playing with us.”

When it was clear Point would not be able to return in Game 7 against Toronto, he grabbed a tablet and began helping and encouraging teammates from the bench. It’s a part of the Lightning’s makeup that every player wants to do his part, even if he can’t be on the ice, to contribute to winning.