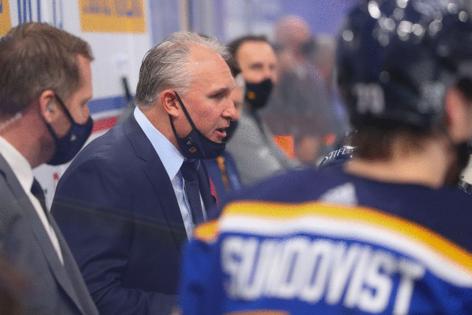 DENVER – There is hope for the St. Louis Blues after all. Remember – and how could you forget — they were outshot by about a million to one in Game 1 as Colorado put on a dazzling display of speed and skating.

But in the playoffs, what happens in one game frequently has no bearing on what happens in the next one. And somehow, the Blues found a way to escape the Mile High City with a 4-1 victory Thursday, tying the best-of-seven playoff series at one game apiece.

As was the case in Round 1, when the Blues split their first two game in St. Paul against the Minnesota Wild, they have negated Colorado’s home ice advantage. The next two games are in St. Louis, with Game 3 set for 7 p.m. (or thereabouts) Central at Enterprise Center on Saturday.

After his team managed only two goals and was outshot 54-25 in the Game 1 overtime loss, coach Craig Berube changed all three of his top lines. It was a bold move because two of the three had not opened a game together all season until Thursday. But it worked.

He also went with the unorthodox lineup of 11 forwards and seven defensemen for the fifth game in a row in the postseason and the 21st time overall this season.

Jordan Binnington, once against wearing those dark blue pads, improved to 9-2-0 since being yanked in an early April contest in Edmonton. Entering Thursday, Binnington – and the Blues as a whole – had lost six straight postseason games to the Avalanche, dating back to the Edmonton Bubble in 2020.

The Blues’ best period in Game 1 was the first. The Blues were even better in the first period Thursday, but unlike Tuesday – when they led 1-0 after one – this game was scoreless after the first 20 minutes.

St. Louis got some good looks early, outshooting the Avs 5-1 in the opening five minutes. They were much better with their zone exits, and even won a faceoff or two. After losing nearly two of three faceoffs on Tuesday, the Blues were exactly at 50 percent at 11 of 22 after one period.

Colorado had only one of those mesmerizing periods of puck possession, where they took several laps around the St. Louis zone. And later in the period, Colorado had a sequence where it got some steady pressure in front of the net.

But both goalies were sharp and impenetrable in the opening period and St. Louis had a 14-8 edge in shots on goal. Avalanche goalie Darcy Kuemper left a few rebounds, but the Blues couldn’t capitalize.