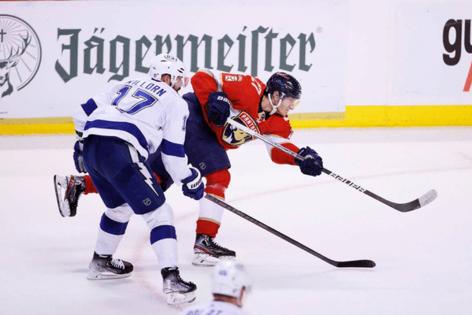 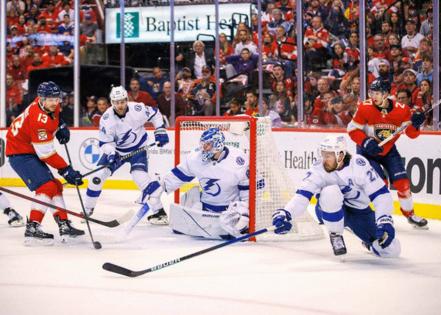 SUNRISE, Fla. — The clock showed 0.9 seconds remaining and the Florida Panthers were frozen on the ice. Ross Colton had stumbled to the ice in joy and the Panthers were gobsmacked.

With virtually no time left on the clock, the Lightning stunned Florida for a 2-1 win Thursday in Sunrise.

The Panthers’ season — the best in franchise history — is on life support, down 2-0 in a postseason series to Tampa Bay for the second straight year.

Colton actually beat star goaltender Sergei Bobrovsky with 3.8 seconds left, but the actual time left on the clock was meaningless. Florida lost in near-inexplicable fashion with overtime mere seconds away.

It happened off a stunning breakdown by the Panthers’ defense. The Lightning rushed into Florida’s zone for one final try as the clock ticked away in the third period and too many Panthers followed Nikita Kucherov as he went behind the net. It left Colton all alone in front of the net and the star right wing teed up Tampa Bay’s versatile forward for a game-winning one-timer, leaving the crowd of 19,716 at FLA Live Arena speechless, except for those Lightning fans who traveled across the state and were chanting “Let’s go Bolts” long after the arena had otherwise emptied out.

For the second straight year, Florida will head to Tampa for a pair of games, needing to win at least one to keep its season alive and guarantee one more home game.

The Panthers felt like they missed a chance in Game 1. It happened again in Game 2, as Florida outshot Tampa Bay, 36-27, and spent most of the third period coming close to scoring its own go-ahead goal.

Once again, the Panthers dug itself an early hole. For nearly 12 minutes, they mostly controlled the pace against the Lightning, but Tampa Bay got the break it needed with 8:31 left in the first. Defenseman Brandon Montour hooked Ross Colton as the versatile Lightning forward wrapped around behind the Panthers net. Tampa Bay went on the power play for the first time and needed only 37 seconds. Florida left Steven Stamkos alone for too long at the left faceoff circle and the superstar forward made an easy centering pass to Lightning right wing Corey Perry, who deflected a go-ahead goal past star goaltender Sergei Bobrovsky.

It was Tampa Bay’s fourth power-play goal of the series — all coming in just 35:44 of game time — and put the Panthers in a hole for the fifth straight game.

In Round 1, Florida shrugged off three of those deficits to finish its six-game, first-round victory with three straight come-from-behind wins against the No. 8-seed Washington Capitals. In Round 2, the Panthers have yet to pull off any of the comeback heroics they made into an identity in the regular season, when they tied the NHL record with 39 come-from-behind wins to win the Presidents’ Trophy for the first time.

On Thursday, they came close, and even tied the game up in the second period when center Eetu Luostarinen rocketed a slap shot from the top of the left faceoff circle and got it to trickle past star goaltender Andrei Vasilevskiy with 1:53 left in the period.

About a minute later, winger Anthony Duclair nearly gave them the lead when he ripped a power-play one-timer for the bottom right corner of the net, only to have Vasilevskiy rob him with a sliding left-pad save.

As close as Duclair came, the near miss only compounded Florida’s biggest problem in this series so far: The difference through two games has been the Panthers’ ineptitude on the power play and the Lightning’s special-teams excellence.

When Tampa Bay went up 1-0 with its first-period power-play goal, the Lightning improved to 4 of 7 to start the series and 11 of 40 to start the Cup playoffs. When Florida failed to convert on any of the power plays it got in the first period, the Panthers fell to 0 of 6 in the series and 0 of 23 in the playoffs.

On the first two, Florida never even really came close. The Panthers put just one shot on goal on each of those first two power plays and spent about half the time on the second one just trying to get into the zone after an early misplay by star defenseman Aaron Ekblad chased them back into their own end.

Florida got its third with 46.9 seconds left in the second and tested Vasilevskiy three times in the final 10 seconds of the period before taking another 1:14 of power-play time into the third.

On the second half of the power play, the Panthers didn’t get off a single shot, then they failed on two more down the stretch.