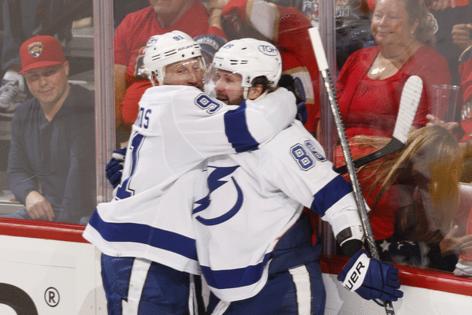 SUNRISE, Fla. — With Brayden Point, the best player in the Lightning’s first-round playoff series win over Toronto, sidelined for Tuesday’s second-round opener against Florida, the Lightning needed someone else to push the pace.

Enter Nikita Kucherov, who put the game on his stick in the second period and brought the Lightning back from a sleepy series start with a highlight-reel setup of the tying goal in Tampa Bay’s 4-1 win.

On the power play, Kucherov made a marvelous move, juking Florida defenseman Aaron Ekblad on the rush, faking toward the middle, then taking the puck to his left and leaving Ekblad flailing at air. He fed Corey Perry along the back post for what might have been the easiest open-net goal of his career.

The Lightning were on the power play because of Kucherov, who picked up speed skating through the neutral zone and made a move on Florida defenseman MacKenzie Weegar that left him flatfooted and hooking Kucherov in desperation.

Kucherov iced the game with 4:06 remaining thanks to a power-play goal, setting up along the half wall, then skating to the right dot and unloaded a quick wrister inside the near post past Anthony Cirelli’s screen in front. The Panthers challenged for goaltender interference, claiming Cirelli hindered Florida goaltender Sergei Bobrovsky, but the challenge was unsuccessful.

The Lightning, coming off their hard-fought seven-game series win over the Leafs, were slow out of the gate. Despite the buzz around the Sunshine State Series, the energy inside FLA Live Arena didn’t match that of either Amalie Arena or Toronto’s Scotiabank Arena.

Kucherov’s goal seems to tilt the ice, and the Lightning got a go-ahead goal from fourth-line center Pierre-Edouard Bellemare.

Bellemare’s goal was a result of a relentless pressure by the team’s “school bus” line off a faceoff win in the offensive zone. Perry unloaded a wrister from the circle, Pat Maroon brought pressure up front, and Bellemare buried a loose puck with an off-balance shot through traffic.

Ross Colton cleaned up a rebound in the slot to put the Lightning up 4-1 on the power play with 2:16 left in the third period.

The game wasn’t without its drama. Florida forward Anthony Duclair found the back of the net with 8:05 left in the third, sending FLA Live Arena into a frenzy, but the goal was negated after the Lightning successfully challenged that the puck hit the netting before Duclair retrieved the puck and scored.

The Lightning struggled early. They had two power-play opportunities in the first 10 minutes of the game, but couldn’t score and managed just three shots on goal in four minutes on the man advantage.

They clearly missed Point. Point usually handles entries into the zone on the power play and helps establish zone time with his puck retrievals, but without him the Lightning struggled to create opportunities.

A blown coverage in the Lightning zone allowed Duclair to open scoring with 5:59 left in the first period.

Moments after Cal Foote came up with a huge block in the slot on Weegar’s slap shot, the Panthers were charging back across the neutral zone as Jonathan Huberdeau brought the puck up along the right side.

Duclair trailed on the play and sneaked in past Alex Killorn and Ondrej Palat, tapped his stick on the ice as he charged the far post. Huberdeau fed him, and he flicked a shot past Lightning goaltender Andrei Vasilevskiy.

After a rocky opening period, the Lightning played defense much like that did in Game 7 against Toronto, blocking shots and closing off the front of the net. Vasilevskiy made 33 saves, none more important than his stop of Claude Giroux on a rush inside the final six minutes.