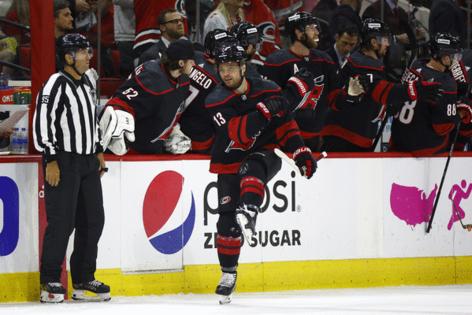 MORRISVILLE, N.C. — Let us not visit the sins of the father upon the son. Tie Domi was as hated here as he was anywhere else, although it’s a two-way street, given that the Carolina Hurricanes put an end to what may have been his best shot at a Stanley Cup.

So what a strange world we are living in that nobody, nowhere could have been happier than Domi to see the Hurricanes win and advance Saturday, and that would have been true even if Max Domi hadn’t been the surprise star.

Playoff hockey makes for strange alliances, and none may be stranger than the newest Huge Caniac, celebrating in the seats at PNC Arena wearing a Hurricanes hat, in the same building where he once took 10 penalty minutes in an Eastern Conference finals game: a 1-0 Toronto Maple Leafs win, nine days short of 20 years ago.

The Leafs won that battle. The Hurricanes won the series. Tie Domi never made it that deep into the postseason again. It’s not so much that time healed those wounds; fatherhood left him no choice.

“He doesn’t care. He doesn’t care at all,” Max Domi said Monday. “Wherever I play, he’s the biggest fan in the world. Pretty simple. Nothing else really matters. He could care less about what’s happened in the past. What’s past is in the past.”

The immutable truth here is people will do just about anything for their kids, and hockey parents are no different with their sons and daughters even when said parent is a current NHL coach or former NHL player. Rod Brind’Amour was out on the ice with his son Skyler again after practice Monday; it’s not out of the realm of possibility that he could find himself watching the Edmonton Oilers – who took Skyler in the sixth round in 2017 – or some other team that isn’t the Hurricanes with a deep rooting interest someday.

That’s probably harder for a fully employed coach and easier for a fully retired player like Tie Domi, who did most of his damage with the Maple Leafs but has switched alliances throughout Max’s career – even to the truly hated Montreal Canadiens. By that standard, the Hurricanes are an easier swallow, 2002 aside. The feeling is slightly mutual, with Brind’Amour at least, who both welcomes the Hurricanes’ newest bandwagon fan and understands his perspective.

“I only knew him on the ice,” Brind’Amour said. “He was a tough dude and I stayed away from him the best I could. I’ve met him a few times now. Nice guy. But I didn’t have a relationship with him. Everything kind of comes around at some point. It’s amazing.”

Max Domi said his father would prefer to avoid the spotlight – there’s no chance he would sound the PNC warning siren, which was one question posed, although that’s Max’s preference anyway – so his presence, choice of headwear and suddenly Hurricanes-saturated Twitter feed will have to suffice as evidence of his new fandom.

As for the son, Domi’s star turn in the Game 7 win over the Boston Bruins — two goals and an assist in the 3-2 win — wasn’t a total surprise. He’d earned a promotion to the Vincent Trocheck line with his play in Game 5, moving ahead of the disappointingly ineffective Martin Necas for Game 6 and staying there Saturday. By the time it was over, he’d tied the family record for goals in a postseason (two).

Domi can also now claim a spot among the very short list of low-cost trade-deadline acquisitions that truly proved their worth. The Hurricanes added him to add scoring depth and that’s exactly what he provided at the most critical moment of the season. He has bounced all over the lineup since his arrival, and probably will again as the Hurricanes move on to face the New York Rangers in the second round starting Wednesday.

“I think it’s behind us now,” Domi said. “It’s just all about opportunity, right? Whatever role I’m in, I’m here for the short term, and you have to understand you’re coming to a team that’s had some success. Even though you might usually be in a certain spot, you’re not going to get that same opportunity here. And that’s totally fine.”

For the moment, he’s just a son advancing through the playoffs, with a famous – and very happy – father.

While many in hockey circles still see former New York Ranger coach David Quinn as the front-runner – with a ...Read More