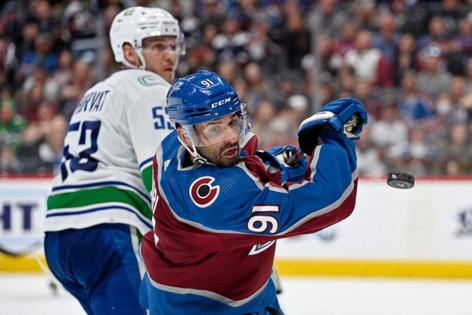 Nazem Kadri is prepared for whatever shenanigans might develop in Game 1 Tuesday in the Western Conference semifinals against St. Louis.

The Avalanche center might be asked to fight for the third time in four meetings against the Blues this season. Or, he could be targeted for big hits and taunted.

What is known is that St. Louis will try to take Kadri off his game. Just as the Avs will try to make it uneasy for the Blues’ stars.

There is no forgetting in hockey, however, and for TNT/Blues analyst Darren Pang, the bad blood between Kadri and the Blues is a juicy storyline heading into Game 1 at Ball Arena.

“No question about it. Every single time there is a skirmish or a hit, it’s one of those individual battles you don’t take your eyes off of, and you wonder if there’s anything more, is something else going to happen?” Pang said in a phone interview.

The anniversary of Kadri’s check-to-the-head of Blues defenseman Justin Faulk is Thursday, which will be Game 2 of the series. That hit gave Faulk a concussion and led to Kadri’s eight-game suspension in last year’s playoffs — an absence that proved costly for the Avs.

Pang said that Kadri, who has a long history of playoff suspensions, could use his reputation to help the Avalanche by keeping his cool and helping draw penalties.

“The Colorado Avalanche has had one of the best seasons in NHL history, and I’m pretty sure the Blues don’t want to put themselves in the penalty box and face Cale Makar and that lethal power play,” Pang said.

Kadri has three fighting majors this season — including two against the Blues. He fought Blues forward Brayden Schenn 40 seconds into the first game between the teams on Oct. 16 in Denver. And on Oct. 25 in St. Louis, he fought Faulk 47 seconds into the rematch.

“It’s kind of over and done with,” he said after the Avs’ practice Monday at Ball Arena. “I answered the bell, multiple times. And this time of year, I think both teams understand that winning comes first and any sort of redemption (is uncommon). It’s all about getting wins and the score at the end of the game.”

Avalanche captain Gabe Landeskog said the Blues will focus on winning over any redemption against Kadri.

“We’re not spending any time thinking about it. We’re preparing for St. Louis Blues.”

Footnotes. Landeskog and defenseman Erik Johnson were participants in Monday’s full-team practice at Ball Arena. They both took maintenance days on Sunday. … The Blues practiced in St. Louis on Monday before traveling to Denver. Defenseman Marco Scandella was a full participant, but defenseman Torey Krug was not. Both missed the end of the first-round series against the Minnesota Wild. … The Avs and Blues will have a morning skate on Tuesday at Ball Arena.