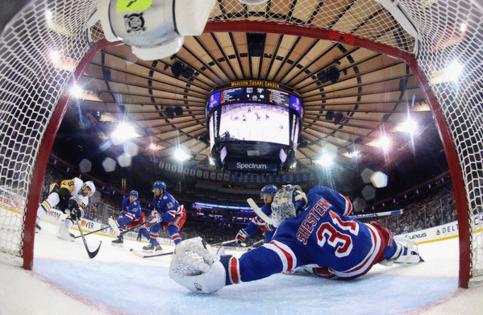 NEW YORK – A series that began in Game 1 with a triple overtime marathon that tested both teams’ stamina and Louis Domingue’s stomach was bookended in the same way.

Well, with one notable exception: The result.

The resilient Rangers fought back from 2-0, second-period deficits in Game 5 and Game 6 to force the all-or-nothing Game 7. They did it again in Sunday’s Game 7 with just 5:45 remaining when Rangers forward Mika Zibanejad’s one-timer from the right faceoff dot beat Penguins goalie Tristan Jarry over his glove side to send the game to overtime.

Then, in the first overtime, the Rangers power play was given another opportunity to be the difference when Brock McGinn committed a holding penalty. Star forward Artemi Panarin ripped a shot from the right faceoff circle that sailed through traffic and into the cage.

And like that, for the fourth consecutive year, the Penguins’ postseason ended with a first-round flameout in the form of a 4-3 loss to the Rangers.

Given the uncertain contract status of Evgeni Malkin and Kris Letang (not to mention Bryan Rust), it’s fair to wonder if this was not just the end of a season but also the end of an era. After hosting three Stanley Cup parades in Pittsburgh, there is no guarantee that Sidney Crosby’s two mainstays will be back for another season.

But that discussion can be pushed to the back burner, at least momentarily, as the speculation will continue to swirl until free agency frenzy opens in the summer.

For now, let’s focus on Sunday and the series as a whole. Because when the dust settles on this one, the Penguins will look back at the chances they let slip away.

On this same ice on Wednesday, the Penguins held a 2-0 lead and were less than 25 minutes from closing out the series. But when Rangers defenseman Jacob Trouba threw his elbow toward the face of the league, the Penguins lost Crosby, the lead and the game. Given a second chance to close things out in Game 6, the Penguins again held a 2-0, second-period lead. And again, they let it get away.

The way the Penguins let a series they controlled unravel without warning mirrors the way the regular season ended. Through December and January, Pittsburgh was the NHL’s hottest hockey team, reeling off a ridiculous 17-2 record. At that point, they looked every bit like a legitimate contender if they could only get healthy and add a difference-maker at the deadline.