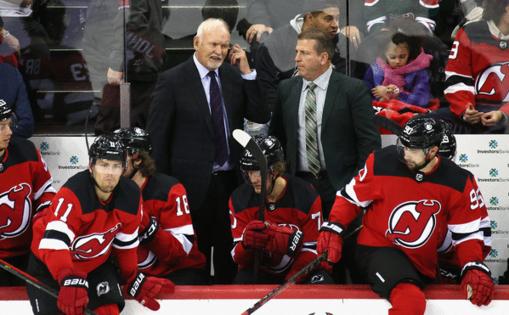 When defenseman Rasmus Ristolainen passed the puck wide to defenseman Ivan Provorov at the blue line as the Flyers attempted to regroup before exiting their own zone, winger Andreas Johnsson jumped on the puck and left Provorov in his wake. Although Ristolainen attempted to cut off Johnsson as he skated toward goalie Martin Jones, Johnsson found winger Jesper Bratt crashing the net. Bratt beat Jones, scoring the Devils’ go-ahead goal in their 5-2 win over the Flyers.

The Devils kept the pressure on in the third period, when winger Nathan Bastian found the back of the net to widen the margin of victory and when the Devils scored an empty-net goal. The Flyers’ loss extended their skid to six games.

Once again, Jones tries to keep Flyers in it

In his last start against the Florida Panthers on Wednesday, Jones stole the team a point and helped them force overtime by denying 43 shots on goal. Jones carried that same energy into his start opposite the Devils, who mustered 18 high-danger scoring chances against the Flyers through three periods, according to Natural Stat Trick. One of the key saves Jones made came late in the second period when Johnsson sprung Bratt for a breakaway. Jones denied Bratt, keeping the Flyers out of a two-goal deficit.

The bulk of the Devils’ high-quality opportunities came in the second period when the Flyers struggled to clear the puck on the Devils’ initial shots on goal and left Jones vulnerable to second and even third opportunities. On the Devils’ second goal, Jones first denied Johnsson on yet another breakaway and stifled his rebound with his pad. Ristolainen’s attempt to clear the defensive zone was picked off by Bratt, who found Johnsson across the ice and didn’t miss the third time around.

No shortage of shorthanded goals

Over their last two games, the Flyers have had more of an impact on the score sheet while on the penalty kill than on the power play. Against the Carolina Hurricanes on Friday, Joel Farabee scored his first career shorthanded goal, which was his second goal in two games. Meanwhile, the Flyers couldn’t capitalize on three power play opportunities and only managed a single shot on goal through six total man-advantage minutes.

The trend continued against the Devils. In the first period while on the kill for a Farabee hooking penalty, Provorov chipped the puck off the boards to center Scott Laughton, who carried the puck up the ice in a foot race with defenseman P.K. Subban. Laughton had a step on Subban and protected the puck well, storming the crease and backhanding the puck over the pad of goalie Mackenzie Blackwood. The tally marked Laughton’s first goal since Nov. 4 against the Pittsburgh Penguins

Meanwhile, the Flyers’ first power play of the night was rife with struggles that resulted in the puck being cleared from the offensive zone four times. Winger James van Riemsdyk attempted to make plays, which included finding an open winger Travis Konecny for a cross-ice pass, but Konecny fell down and the Devils cleared the puck from the zone. Ultimately, the Flyers mustered three shots on goal during three power play opportunities.

Farabee started the season off hot — he had six points (three goals, three assists) through the first four games of the season. After going through a scoring slump in which he only scored one goal in a span of 14 games, he has provided the Flyers a glimmer of offensive production over the last three games, scoring in each one.

His latest goal against the Devils came when Laughton patiently approached the crease from behind the net with the puck, finding Farabee on the opposite side. Farabee fired the puck into the wide-open net past Blackwood to even the score at two early in the third period.