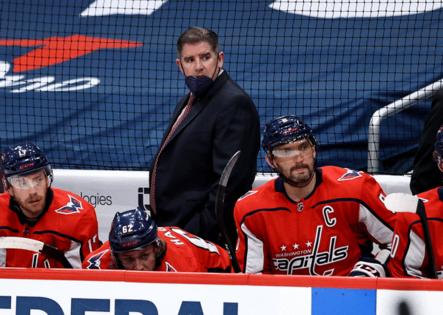 It was time to get back on home ice and face an old foe: the Washington Capitals.

The Caps emerged with a 4-2 victory as Alex Ovechkin picked up his 19th goal of the season and goalie Ilya Samsonov earned his ninth win, taking over first place in the Metropolitan Division.

Canes coach Rod Brind’Amour, while calling the Caps a “great team that gives you nothing.” was not happy with the way the game ended. Neither were a lot of Canes fans, who were loudly booing the refs in the final minutes.

A holding penalty against Canes rookie Seth Jarvis with five minutes left in regulation, followed by a slashing call 30 seconds later against Sebastian Aho gave the Caps a 5-on-3 power play for 1:30. The Canes killed off the Jarvis penalty, but the Caps’ Dmitry Orlov scored on a short shot at the post for the go-ahead goal with 2:55 remaining in regulation — John Carlson’s empty-net goal later make it 4-2.

“It’s a tough way to end the game,” Brind’Amour said. “It was a great hockey game. I thought we had a great third period, just did everything we could. It’s unfortunate.

“What are you going to do? It’s tough. The first penalty is a penalty for sure. We blew our coverage there, which we didn’t do any of that the whole period., then all of a sudden took a little breath and that’s what they do to you. Give up a breakaway and take a penalty.”

It was Aho’s penalty that had Brind’Amour howling mad behind the bench.

“I get it but a tough call,” he said. “It’s a nothing play. We actually have the puck. Like, we’re getting it. I get it, why they call those, but I kind of felt like their guy called it. ‘Ovi’ kind of gave the ol’ yell at the ref and he decides to call it.

“But it is what it is. I mean that’s a penalty. Can’t do it. And that’s your game. That’s the frustrating part for everybody, right, it was a great game and it ends like that. They kind of took it out of our hands but it is what it is.”