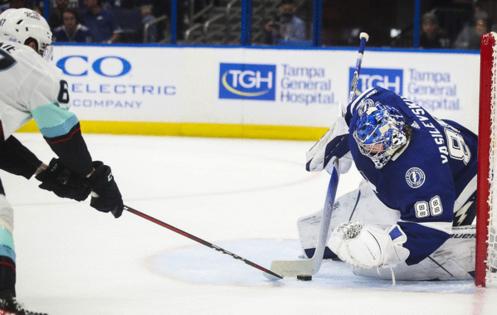 TAMPA, Fla. — Before the puck dropped Friday at Amalie Arena, it already was an emotional night.

Former Lightning forward and fan favorite Yanni Gourde was back for the first time since Seattle claimed him in the expansion draft, and a pre-game ceremony honored former play-by-play broadcaster Rick Peckham, who was part of the latest Hockey Hall of Fame induction ceremony after receiving the Foster Hewitt Memorial Award for his outstanding broadcast contributions.

But the Lightning were not distracted from the task at hand: Helping goaltender Andrei Vasilevskiy reach 200 career regular-season wins. The goaltender and the Lightning delivered in a 3-0 shutout of the Kraken (6-13-1).

Vasilevskiy, 27, registered his second shutout of the season (following Tuesday’s 4-0 win against the Flyers) and made 17 saves against Seattle. It was the first time the Kraken were held scoreless through 20 games.

Lightning forward Pierre-Edouard Bellemare opened scoring 2:52 into the first period. The veteran took a wrister from the left face-off circle on a feed from Corey Perry for his first goal of the season.

Less than a minute into the second period, Ross Colton added insurance with his second goal of the season to put the Lightning (12-4-3) up by two.

Things came to a brief halt, however, when forward Boris Katchouk raced toward Seattle goaltender Phillipp Grubauer and was rammed by defenseman Jamie Oleksiak just outside of the crease.

Katchouk spun after the hit, hitting his head on the goal post before landing under the net.

He stayed down on the ice for about a minute, talking with head athletic trainer Tom Mulligan, and skated off under his own power to the Lightning bench before walking down the tunnel.

Katchouk returned to the bench with nearly four minutes remaining in the second period, taking his first shift back with 2:52 remaining.

With just over eight minutes remaining in the game, Steven Stamkos extended the Lightning’s lead to 3-0 with his 11th goal of the season from the left faceoff circle on a pass from Ondrej Palat. Stamkos leads the roster with 23 points this season.

DETROIT — Goalie Alex Nedeljkovic was on the bench when his teammates tried to clean up their mess, only to come up with their worst wreckage of the season.

CHICAGO — The Chicago Blackhawks took another step toward hiring a new general manager Wednesday, announcing plans to begin interviewing candidates this week and to have the new personnel boss in place before the March ...Read More

The Penguins are arguably the NHL’s most successful franchise over the last 40 years. They have five Stanley Cups, a bunch of division titles and one President’s Trophy. Mario Lemieux, Jaromir Jagr, Sidney Crosby and ...Read More

Noah Gregor and Jonathan Dahlen both snapped long goal droughts and Nicolas Meloche scored his first career NHL goal as the Sharks began a critical four-game road trip with a 4-1 win over the Washington Capitals on ...Read More

Short-handed on defense for yet another game, the Kraken have had to look deep within their defensive depth.

On Tuesday, Adam Larsson did what he could.

The 29-year-old defenseman not only scored in the second period of ...Read More

PITTSBURGH — For the first two periods of Tuesday’s 6-3 victory over the Arizona Coyotes at PPG Paints Arena, the Penguins couldn’t shake one of the NHL’s worst teams.

The Coyotes kept them off the scoreboard ...Read More