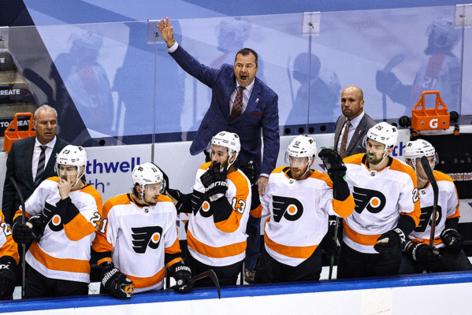 PHILADELPHIA — The Flyers were outskated, outshot and overall outplayed in a 6-3 loss to the Carolina Hurricanes on Friday.

For one minute, it seemed like the Flyers were off to a strong start. They scored 50 seconds into the game when Ivan Provorov snuck a puck past Antti Raanta from behind Sean Couturier.

The Hurricanes challenged it. The goal was upheld, but the game slowed down. The Flyers went on the power play, but momentum was shifting in the Hurricanes’ favor.

The Flyers held Carolina off the board until Sebastian Aho scored with 6:20 left in the first period. Joel Farabee responded with a short-handed goal, and the Flyers went into the first intermission ahead 2-1.

When they came back out, the Hurricanes effectively snuffed any attempt by the Flyers to retain control of the game.

Aho scored his second goal 23 seconds in to tie it. Thirteen seconds later, Rasmus Ristolainen scored his first goal as a Flyer to grab the lead back. Before they even finished announcing the goal, the Hurricanes went down and tied it again, this time with a goal from Jesper Fast.

The Flyers did not score again while the Hurricanes added another in the second as well as one in the third. Flyers goalie Carter Hart faced 21 shots and gave up six goals. Antti Raanta faced 35 shots and made 32 stops.

“We’ve got to stick together as a group,” coach Alain Vigneault said as the Flyers fell to 0-3-2 in the last five games. “Everyone, starting with me, needs to find a way to be better. That’s what we’re gonna try and do tomorrow.”

Farabee steps up twice in a row

With the scored tied up and the Flyers on the penalty kill, Farabee rushed into the offensive zone, faked out Seth Jarvis and put the puck in the goal almost before Raanta could even react.