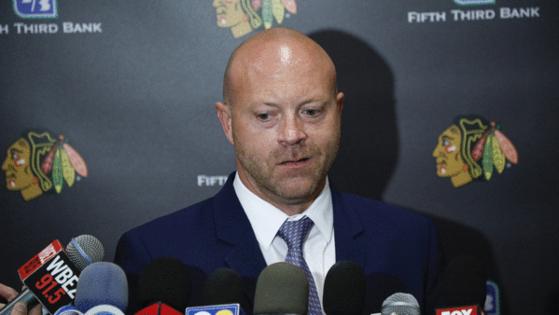 After a bombshell report by investigators from Chicago law firm Jenner & Block revealed that former Hawks President John McDonough, general manager Stan Bowman and former coach Joel Quenneville were all part of a meeting discussing the allegations in May 2010 — yet did nothing about it until the Stanley Cup Final had concluded three weeks later — the only thing the Hawks owners can do is beg for everyone’s forgiveness and find a leader who can bring trust back to the organization.

Their first step Tuesday — after Hawks Chairman Rocky Wirtz and his son, CEO Danny Wirtz, made sure to let everyone know they knew nothing of the allegations until the first lawsuit was filed this past May — was to get Bowman to hand in his resignation, replacing him on an interim basis with Kyle Davidson.

Bowman in turn released a statement in which he basically blamed McDonough for not handling the incident. Thus he leaves the Hawks in the same manner he operated as their GM, with a smirk and no real acceptance of responsibility for his actions.

For years Hawks fans wondered how the Wirtzes could continue to allow Bowman to run the franchise into the ground with so many poor free-agent signings and trades. Now we know. Their respect for Bowman is so deeply ingrained, they allowed him to resign instead of firing him, as any other corporation would do to an employee involved in a similar mishandling of an alleged sexual assault.

So Bowman was given carte blanche to ditch the rebuild plan this past summer and make a series of big moves that theoretically would restore the franchise to relevance. Now it all has come crashing down in stunning fashion, and Bowman’s incompetence in personnel matters turned out to be the least of his concerns.

Danny Wirtz said Bowman “exhibited extreme professionalism and integrity” while cooperating with investigators, adding that if the incident had happened in 2021 with Bowman in charge, “the Stan that I know, and we know, would’ve acted differently and been a louder voice in that room.”

The Stan he knows was in that room in 2010, by the way, and was as culpable as the rest of the executives who buried the incident until the Stanley Cup was safely in their possession.

What we now have is a winless team without an experienced GM, a head coach in Jeremy Colliton who seems destined for a new and exciting career as an Uber driver, the team’s two biggest stars — Jonathan Toews and Patrick Kane — in the COVID-19 protocol, the end of a 535-game streak of sellouts at the United Center and a sordid scandal that threatens to damage both the organization and the entire NHL.

The league fined the team $2 million for “inadequate internal procedures and insufficient and untimely response,” and Commissioner Gary Bettman still has to deal with the two remaining NHL employees from the fateful meeting: Quenneville, now coaching the Florida Panthers, and former assistant general manager Kevin Cheveldayoff, now the GM of the Winnipeg Jets.