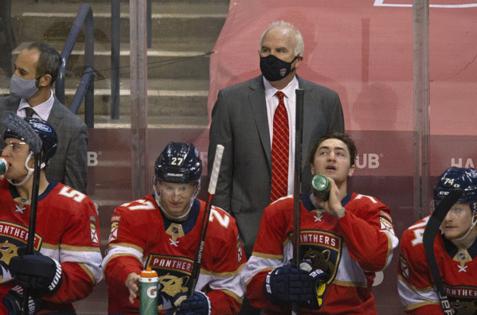 MIAMI — Joel Quenneville was part of a 2010 meeting to discuss sexual assault allegations against a former Chicago Blackhawks video coach, an NHL investigation found, and the Florida Panthers coach will now meet with Gary Bettman to discuss his involvement in the organization's “mishandling of the 2010 matter.”

The findings of the investigation were published Tuesday and contradicted a statement Quenneville made in July.

“I first learned of these allegations through the media earlier this summer,” Quenneville said in a statement to the Associated Press. “I have contacted the Blackhawks organization to let them know I will support and participate in the independent review.”

The investigation, however, detailed a 2010 meeting of “senior club management” after an unnamed player alleged sexual assault by then-Blackhawks video coach Brad Aldrich. According to report by Chicago released by the Chicago law firm Jenner & Block, the meeting included Quenneville and “after discussion of the alleged incident and how the Club should be dealing with it — including the potential options of initiating an investigation, notifying appropriate members of the Human Resources Department, ensuring the immediate separation of Aldrich from the Club’s players, among other things — ultimately the determination was made and direction given that Hockey Operations personnel should devote their exclusive attention to on-ice matters heading into the Stanley Cup Final, and that other appropriate Club personnel within the organization would take responsibility for ‘handling’ the Aldrich situation.”

Aldrich resigned after the 2010 Stanley Cup Final rather than agreeing to an investigation and he continued to be around the team. Two lawsuits were filed against the Blackhawks in May by the unnamed former Blackhawk and a former high school hockey player. Aldrich was later convicted of fourth-degree sexual assault for an incident involving a high school student in Michigan.

In the wake of the NHL’s report, Chicago general manager Stan Bowman resigned and senior vice president of hockey operations Al MacIsaac is no longer with the Blackhawks. Chicago CEO Danny Wirtz said no one from the Blackhawks’ management team in 2010 will be with the organization moving forward.

Chicago fired Quenneville in 2018 and the Panthers hired him to a six-year deal in 2019. He’s now in his third season in Florida and has the Panthers off to the best start in franchise history. Bettman said he will meet with Quenneville and Winnipeg Jets general manager Kevin Cheveldayoff, who was also part of the meeting, as a result of the findings.

“I plan to arrange personal meetings in the near future with both individuals to discuss their roles in the relevant events as detailed in the Report,” the commissioner said in a statement. “I will reserve judgment on next steps, if any, with respect to them.”

Florida declined to comment on the report and Quenneville’s involvement.