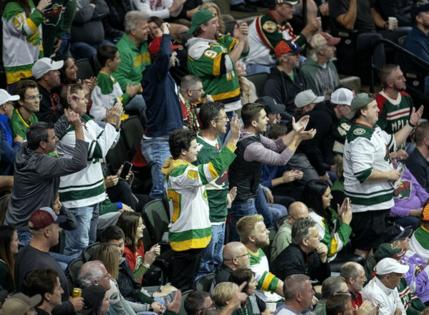 The most loyal audience for professional sports in the Twin Cities is the one that follows the Wild in St. Paul. This could be argued by Vikings zealots, but they only have to prove that loyalty eight or nine times annually, and generally on Sunday afternoons.

What else do people have to do on Sunday afternoons?

Wild customers have to prove their loyalty a minimum of 41 times, with the largest share of those on cold, dark nights of winter here in our Frozen Wasteland.

There was amazing proof of Wild loyalty in January 2013: The NHL had lost an entire season with a lockout in 2004-05, and the owners were back at it again for the start of the 2012-13 schedule.

The strong-arm tactics did not work until the season's start had been pushed back to January and the schedule reduced to 48 games. There was bitterness over this with many fan bases, but not Minnesota's.

Owner Craig Leipold had signed Zach Parise and Ryan Suter, two top free agents, on July 4, 2012. He gave them twin 13-year contracts, then did battle with the owners vs. the players to eliminate future contracts that exceeded eight years.

The Wild was nine years removed from its one serious playoff run – the spring of 2003 – and it was finally losing a significant number of customers at the end of a dreary 2011-12.

Yet, when hockey resumed in January 2013, the fans had been reignited by the presence of Parise and Suter and again swarmed Xcel Energy Center. There were a couple of early crowds a fraction under the sellout number, then the Wild went on an elongated sellout streak, even without significant playoff success.

There were some empty seats appearing again during an uninspiring 2019-20 season. Coach Bruce Boudreau was fired by new general manager Bill Guerin after 57 games, and the schedule was stopped in March after 66 games by the pandemic. Twenty-four teams went to a Canadian bubble months later, and the Wild lost 3-1 to a bland Vancouver team in a preliminary round.

The 2020-21 season was delayed until mid-January. It took until late in the 28-game home schedule to get permission to host COVID-reduced crowds of 3,000, and then 4,500 for the three playoff games vs. the Vegas Golden Knights, which Vegas won in seven.