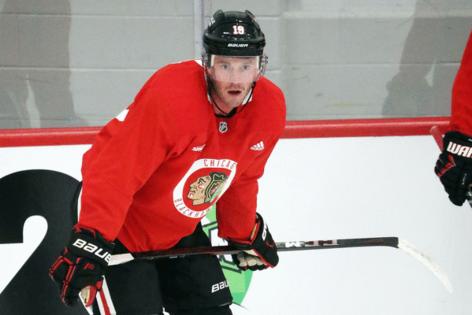 White it’s a common drill, it represented the latest step in Toews’ long recovery from what he was told is “chronic immune response syndrome,” which has him feeling drained and lethargic as his body responds to stress.

The longtime Hawks captain missed all of last season while dealing with the condition.

“Just to see him out there and seeing how good of a player he is when he misses time is so impressive,” defenseman Connor Murphy said. “I know I wouldn’t be able to keep up with any practice missing that much (time).

“He’s just a competitor and a warrior and such an athlete that he’s able to bounce back and look as good as he’s ever can when he’s needed.”

Toews also confirmed he had COVID-19, though he didn’t specify when he believed he had it.

“I was pretty sure,” the center said, adding later that while he wasn’t tested for COVID-19, he did test positive for antibodies.

When answering a question about when he was diagnosed with CIRS, Toews explained: “How do you put your finger on one thing? To me, it’s never that simple. ...

“My health hit a wall, and a lot of things add up to that. The whole process was how do you take a look at what went wrong, how do you find some balance in there and still do the thing that you love to do, the thing you were born to do and just do it from a healthier approach and a healthier perspective.”

Toews, 33, spent the 56-game season on long-term injured reserve, his most significant time sidelined by an injury since missing the final 22 games of 2011-12 with a concussion.