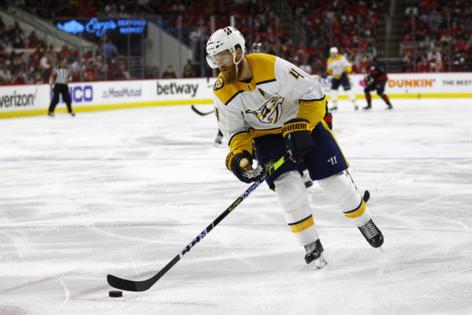 PHILADELPHIA — The Flyers moved on Saturday from two players whom they once regarded as potential franchise cornerstones, trading Nolan Patrick and Phil Myers to the Nashville Predators for veteran defenseman Ryan Ellis.

Over his 10-year career, the entirety of it with Nashville, Ellis, 30, has scored 75 goals and gained a reputation as one of the NHL’s better offensive-minded defensemen. He appeared in just 35 games last season because of what the Predators called an upper-body injury. Five-foot-10 and 180 pounds, he had a career-high 16 goals during the 2016-17 season, when he helped the Predators reach the Stanley Cup Final under former Flyers coach Peter Laviolette.

Ellis had signed an eight-year, $50 million contract with the Predators in August 2018, which means the Flyers will pick up the final six years of that deal at an average annual value against the salary cap of $6.25 million. Coach Alain Vigneault is likely to play him alongside Ivan Provorov to form the team’s No. 1 defensive pair.

That Flyers general manager Chuck Fletcher targeted a well-regarded defenseman on the trade market was hardly a surprise. Last season, the Flyers gave up the most goals in the NHL (197) and were last in the league in save percentage (.880), and the decline in their overall defensive play was one of the main reasons they finished in sixth place in the eight-team East Division and failed to qualify for the playoffs. Throughout the 56-game campaign, Fletcher and Vigneault lamented that the team had never adequately replaced defenseman Matt Niskanen, who had been Provorov’s partner in 2019-20.

“Matt was a great player for us, and clearly, we didn’t fill the void,” Fletcher had said in March. “That type of player is difficult to find. As good as Matt was for us last year, it’s a pretty massive variance in the goals against. It’s a team-level effort right now. Again, we’ve had nights where we’ve defended really well. That’s what we have to get back to.”

Myers, 24, whom the Flyers had signed as an undrafted free agent in 2015, had developed by the end of the ’19-20 season into one of their more promising young defensemen. But he took a step backward last season, when he scored one goal in 44 games and was a minus-10. Patrick, though, was the far bigger and more consequential disappointment. The second overall pick in the 2017 draft, hampered by migraines and post-concussion effects, he has yet to fulfill the expectations that accompanied his entrance to the NHL. After managing just 61 points over 145 games in his first two seasons with the Flyers, Patrick missed the entire ’19-20 season, only to score just four goals in 52 games in ’20-21.

The Flyers would have had to protect Patrick from selection by the Seattle Kraken in the league’s expansion draft, which will be held Wednesday night. By trading Patrick, they have opened the possibility of instead protecting James van Riemsdyk, who was tied for the team lead in points last season, with 43, and who scored 17 goals.

COLUMBUS, Ohio — The Blue Jackets have agreed to a five-year, $27 million contract extension with goalie Elvis Merzlikins, which the team announced Tuesday.

Merzlikins, 27, has split time in net the past two seasons ...Read More