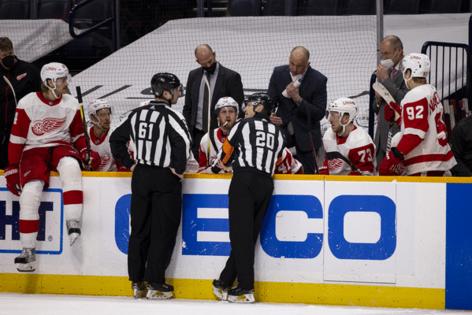 One of the strangest NHL seasons ever came to a close Saturday for the Red Wings.

And of course the Red Wings and Columbus went to overtime before the Blue Jackets' Max Domi scored with 20.4 seconds left to defeat the Wings, 5-4.

The victory gives both teams 48 points this season, but the Wings (19-27-10) finish ahead of Columbus (18-26-12), and out of the Central Division basement, by virtue with more regulation wins.

Columbus forward Jack Roslovic broke a 3-3 tie with his 12th goal, after taking a pass from Seth Jones off a rush, and beating goaltender Calvin Pickard with a shot from the dot.

But Valtteri Filppula tied it 4-4 with his sixth goal, and fourth point in this two-game series, tapping a loose puck in the crease at 16:18.

Columbus took a 3-2 lead in the third period when Eric Robinson scored a short-handed goal at 6:43. Nathan Gerbe raced down the ice, gathered the puck, and backhanded a pass to Robinson, who knuckleballed a shot past Pickard.

But the Wings got it back on the same power play when Sam Gagner scored his seventh goal, snapping a shot from the slot, at 8:04.

Jakub Vrana and Danny DeKeyser had other Wings goals, while Pickard, getting the rare start, stopped 31 shots.

Vrana tied it 1-1 with his 19th goal (with Washington-Detroit combined) and eighth goal in 11 games with the Wings.

Vrana got his stick on Dennis Cholowski's point shot and deflected the puck past Columbus goalie Matiss Kivlenieks at 6:40.

But Atkinson tied it 1-1 with his 15th goal, at 10:16, getting behind Cholowski near the crease and knocking the puck past Pickard.

Michael Rasmussen fed DeKeyser near the top of the left circle and DeKeyser slapped a shot that cleanly beat Kivlenieks.

But Bjorkstrand tied it 2-2 with his 18th goal, beating Pickard with a pinpoint shot to the corner.