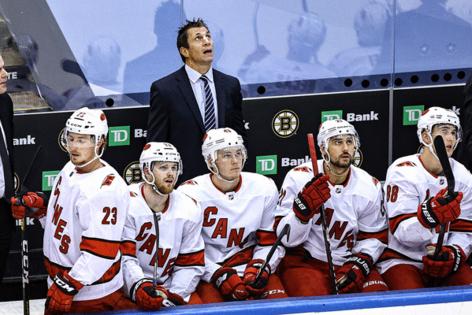 The Nashville Predators played like a team that desperately needed to win.

The Carolina Hurricanes played like a team that wanted to win.

In this game, desperation was the difference. The Predators played their way into the Stanley Cup playoffs Saturday with a hard-fought 3-1 victory over the Canes at Bridgestone Arena.

The Predators (30-23-2) will face the Hurricanes in the opening round of the playoffs as the No. 4 seed in the Central Division. The Canes (36-11-8) clinched the division and the No. 1 seed on Friday when the Dallas Stars beat the Tampa Bay Lightning.

Luke Kunin scored the first two goals for Nashville and workhorse goalie Juuse Saros made it stand up with 21 saves in besting the Canes’ Alex Nedeljkovic. Morgan Geekie scored his third goal of the season with 10:53 left in the third for the Canes off a Steven Lorentz pass, but that was all Saros allowed.

Kunin beat Nedeljkovic with a backhander with 7:33 left in the second, then with a forehand wrister at 7:41 of the third. Erik Haula had an empty-net goal with 1:03 left in regulation for the Predators.

The Canes had a 13-game point streak end Saturday as they failed to set a franchise record. It was the first loss to the Predators this season after six victories and the Canes’ first regulation loss since losing 3-1 to Detroit on April 12.

A preview of the playoffs? Maybe and maybe not. The Preds needed it more Saturday and was playing on home ice. The Canes will have the home ice-ice advantage in the playoffs.

A bigger concern for Carolina was having defenseman Jaccob Slavin leave the game after the first period with a lower-body injury.

The physical play increased in each period and was at a playoff level by the third period, when the hits and checks were frequent.

The Canes pulled Nedeljkovic for a sixth attacker with two minutes left in regulation.

The Canes and Predators close out the regular season Monday at Bridgestone Arena. Then, they’ll go at it again in bigger games.