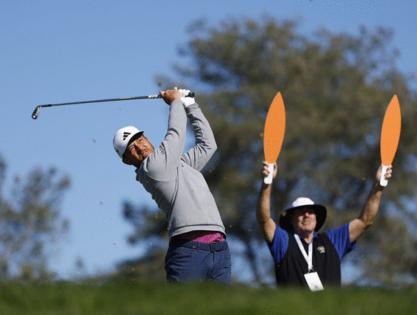 SAN DIEGO — Among the prizes afforded the Farmers Insurance Open champion is a cool trophy that features a Torrey pine, an even cooler check for $1.5 million and a surfboard with a coolness factor somewhere between the trophy and check.

Xander Schauffele, born and raised in San Diego, is well acquainted with the beach and the waves here, although more from the distant bluffs overlooking Torrey Pines State Beach.

Asked if he surfs, Shauffele said, "I wish."

"I got really good at golf kind of later in my career here," added the 29-year-old Scripps Ranch High School and San Diego State graduate, "and I think it's because I wasn't surfing earlier in my career. ... Maybe when I stop playing so much golf, I'll try and pick up surfing because it just seems like something I'd enjoy doing."

Don't expect Schauffele to be checking surf reports anytime in the near future.

He's among the favorites to be standing on the 18th green — posing for pictures with the surfboard as the Farmers champion — on Saturday as afternoon becomes evening.

"Being from here and getting like a homemade prize and being able to put it in my own car and drive away with it 20 minutes from my house would be amazing," said Schauffele, a Las Vegas resident now who recently purchased a home in North County. "I'm not going to let my brain travel too far to that point, but it would be, obviously, just a cherry on top."

Sunshine is in the forecast this week at Torrey Pines for the tournament that follows a Wednesday through Saturday schedule for the second straight year.

Defending champion Luke List is among 156 players participating in an event that will spread around $8.7 million in prize money.

Jon Rahm, No. 3 in the world rankings, is the 4-to-1 favorite coming into the tournament.

SAN DIEGO — If he is to make history this week on the PGA Tour, Jon Rahm couldn't have picked a better place to do it than the Farmers Insurance Open.

Torrey Pines is a special spot for the Spaniard.

LA QUINTA, Calif. — As Luke List waited more than an hour and a half to find out if he would have a shot at his first PGA Tour victory during last January's Farmers Insurance Open, the stress surely had him in mental and...Read More

ORLANDO, Fla. — Fifteen years ago little did anyone know Annika Sorenstam was set to embark on her final season.

Over the time since her decision shook the world of women’s golf, Sorenstam became a wife, a mother of ...Read More

The CW has reached a multiyear agreement for the TV rights to LIV Golf events, a deal that will raise the U.S. profile of the controversial Saudi-backed league.

NEW YORK — The Saudi Arabia-backed LIV Golf League is nearing a TV deal with The CW Network, according to multiple reports.

Though the Saudis poured billions of dollars into the breakaway golf league to lure star talent...Read More

Saudi Arabia’s LIV Golf is allegedly using its US court fight with rival PGA Tour Inc. to “build an intelligence file” on families of 9/11 victims who have been critical of the kingdom and its new professional golfer...Read More