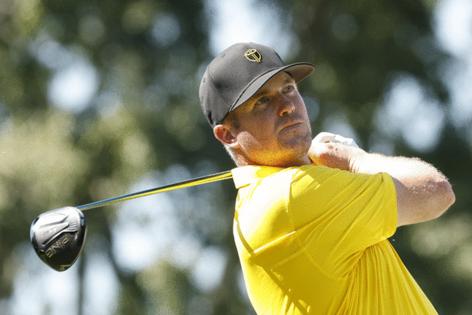 Those storylines took a front-row seat on Wednesday.

Here’s what you need to know from Quail Hollow Club before live competition tees off on Thursday.

No, Ernie Els isn’t still the captain of the International team at the Presidents Cup, but the Big Easy still casts a big shadow at the event, and in a very, very good way. Through his leadership at the event in Australia in 2019, the International side has formed what everyone associated with the team has called a true identity.

And it all started, simply, with a logo.

“Look, I think the shield, I think, is pretty important,” International assistant captain Geoff Ogilvy said Wednesday. “I think it was often hard for us to sort of have an identity, bringing so many different cultures together in the same place. The first year was great. This is the second time. It’s more and more recognizable. People are starting to buy the merch. Kids growing up in the world look at that and think, ‘I want that on my shirt one day,’ and that’s really powerful. You might underestimate that, but that’s a really powerful thing. We represent the rest of the world. That’s a lot of people.”

Beyond a simple shield, Els has been a big figure in golf — and particularly on the PGA Tour — for a long time.

“He’s a commanding presence, Ernie,” Ogilvy said. “When he was talking last time, we were listening. A lot of golf wisdom. One of the best competitors we’ve ever had on this team or golf really in this generation.

“There’s a lot of wisdom, and there’s a lot of respect for Ernie. Him and (this year’s captain) Trevor (Immelman), I know, had lots and lots of chats. Trevor was there last time learning it all, and he’s just taken the ball. He started working as soon as we got home. He got home from Royal Melbourne, how can we do this better? How can we just continue on?”