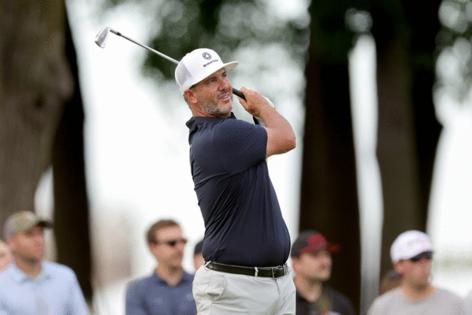 In the end — surprise! — it was the beast of the 18th hole that so many others have found cumbersome finally opening the door just a crack to derail his momentum.

Staring into the last minutes of a fading sun, Piercy woefully mishit his second shot over the water. The splashdown led to a bogey but his 5-under-par 66 has him at 18 under for the tournament, a four-stroke lead going into Sunday's final round.

Emiliano Grillo birdied the last hole to shoot 67 and assure a spot alone in second place. Doug Ghim's bogey-free 65 matched his best round of the season and vaulted him into third at 13 under, tied with Tony Finau. Fargo's Tom Hoge made a late charge with three closing birdies to put a bow on a 66 and sits alone in fifth place at 12 under.

That late blunder aside, Piercy put together an otherwise steady third round of the 3M Open.

Already ahead by three strokes when play started bright and early because of expected severe weather, Piercy continued his dominance. He ran off five consecutive birdies on the front nine when horns blew halting play just before 11 a.m. More than 6 1/2 lightning-filled hours later, players were ushered back to the course to finish.

Piercy had just hit his tee ball on the par-3 eighth hole when PGA Tour officials decided to rush players and caddies off the course and pack fans into waiting shuttle buses. In the hour leading up to that Piercy made more than 50 feet of putts and put the rest of the field in his wake.

He faced a 60-foot birdie putt when play resumed and settled for par then made a rare bogey at the ninth while favoring a throbbing right foot.

His ball-striking wasn't crisp after that, often playing from the water-logged thick rough on the back nine. But clutch play on the greens kept Piercy's charge at full speed ahead.

J.T. Poston, a winner at the John Deere three weeks ago and here off his first British Open experience, birdied four of his first seven holes and matched the round of the day with 7-under 64. Even that spectacular score leaves him nine strokes behind Piercy.

"He's in a position where he kind of controls the golf tournament," Poston said. "It's not playing too hard right now."

That was certainly the case early Saturday, when players teed off in threesomes off split tees starting at 6:50 a.m. In benign conditions, the live scoreboards around the grounds soon showed bleeding red under-par numbers as the course played nearly two and a half strokes under par in the four hours of early play.

Tour rookie Greyson Sigg shot a 64 and is tied with Sungjae Im in sixth at 11 under. Sigg had just made three long birdies in a row, including a 20-footer on the difficult par-4 ninth, as the clouds got darker with the weather moving in.

He waited out the delay with lunch and a nap and made a par on No. 11. Sigg then played the final seven holes in 4 under.

After a run of five missed cuts in a row early this summer Sigg sits on the bubble, 126th in FedEx Cup standings. A strong Sunday would vault him into playoff status.

"Just shoot as low as possible," Sigg said. "Give myself as many looks as possible and hopefully see a few go in."

BLAINE, Minn. — The 3M Open, in its first three summers as a PGA Tour event, produced two of the longest-driving winners you'll find.