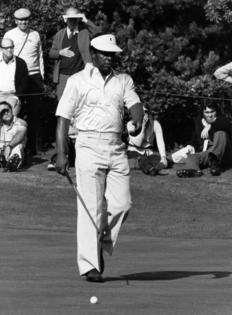 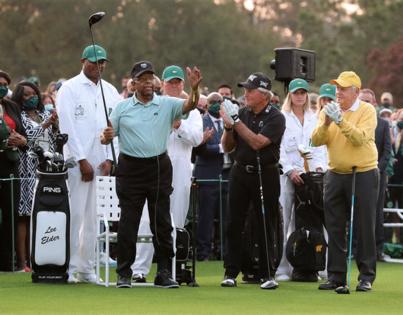 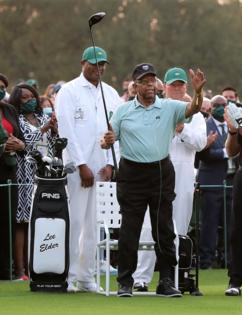 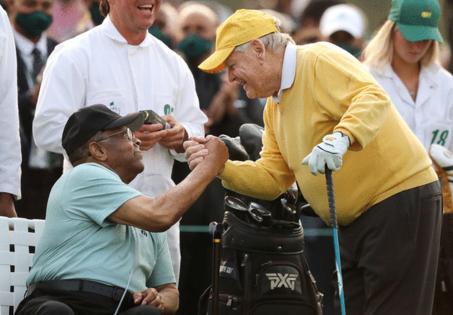 The pioneering Lee Elder, who in 1975 broke the color barrier as the first Black golfer to play in the Masters, died Sunday night at age 87. His death was announced by the PGA Tour and first reported by African American Golfer's Digest.

Elder, who lived in a senior community in Escondido, was honored at Augusta National in April when he joined Jack Nicklaus and Gary Player on the tee box for the ceremonial first drives of the tournament. Although he couldn't match the combined nine green jackets of those golf legends — his best finish at the Masters was a tie for 17th in 1979 — Elder garnered the loudest applause. He hoped to hit a shot of his own but instead acknowledged the gallery from his golf cart.

"For me and my family, I think it was one of the most emotional experiences that I have ever witnessed or been involved in," Elder said following the ceremony, attended by dozens of Black club pros from around the country. "It is certainly something that I will cherish for the rest of my life."

Elder made 448 starts on the PGA Tour with four victories, including the 1974 Monsanto Open in Pensacola, Fla., which earned him an invitation to the Masters. During that Florida tournament, he received death threats and was accompanied by armed security guards as he walked down the middle of the fairways.

"When I won at Pensacola, they had received calls that if I won the tournament I would never get out of there alive," he told the Los Angeles Times in March. "So when I made the putt to win and I was going out to join my friends, Jim Vickers and Harry Toscano, they had beers in their hands ready for me. Jack Tuthill, who was then the tour supervisor, grabbed me and said, 'Hey, you can't go out there.' I said, 'Why can't I?' He said for me to get in the car so they could drive me back to the clubhouse. In the car, he told me about the threats.

"The ceremony was given inside the clubhouse. We couldn't do it outside. That was the decision of the people there. I was ready to get my trophy and my check and get out of there."

The indignities that Elder and other Black golfers endured were a constant, including that Pensacola course once denying him entry to the clubhouse and making him use the parking lot to change into his golf shoes.

"I feel that several players should have been at the Masters before me," Elder said. "You go back and look at Pete Brown, who won the Waco Turner Open in 1965. He was not invited. In 1967, Charlie Sifford won the Sammy Davis Jr. Greater Hartford Open. He was not invited."

Sifford would win the L.A. Open in 1969. Brown won the Andy Williams San Diego Open in 1970. Still no invitations. So it was important to Elder to receive their blessing when he finally garnered a Masters invitation.

Fearing for his safety, he rented two houses in Augusta during his first Masters so people wouldn't know exactly where he was staying. During the week leading up to the tournament, he and friends who had joined him on the trip from Washington were denied service at a local establishment because of their race.

CHARLOTTE, N.C. — Wil Myers is scheduled to make $22.5 million next year to play outfield and first base for the San Diego Padres.

All that money, however, could not buy him tee times at Carmel Country Club.

ST. PETERSBURG, Fla. — He occasionally hears wisecracks from the gallery but learned long ago how to tune them out. When you’ve grown up on the edge of celebrity, the world is filled with background noise.