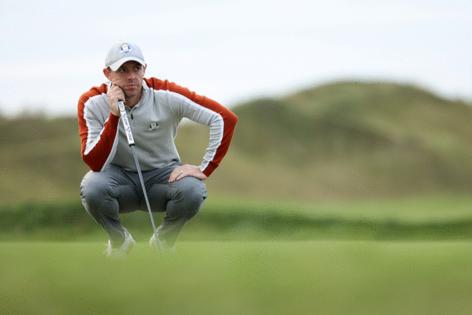 HAVEN, Wis. — Europe's best and world No. 1 ranked Jon Rahm has won 3 1/2 of a possible four points through the first two days of the 43rd Ryder Cup and partner Sergio Garcia has won three for a team that trails the United States 11-5 entering Sunday's singles matches.

Then there's Europe emotional leader Rory McIlroy, the 32-year-old star who didn't win a point and didn't play a Ryder Cup session Saturday morning for the first time since he first played in a Ryder Cup in 2010.

He lost those three matches 5 and 3, and 4 and 3 twice for a European team for which only Rahm, Garcia and 2019 British Open champion Shane Lowry has won a match.

"Obviously disappointing," McIlroy said after he and Ian Poulter lost 4 and 3 to Dustin Johnson and Collin Morikawa on Saturday afternoon. "Disappointing not to contribute a point for the team yet. So hopefully just go out tomorrow and try my best to get a point. Hopefully, we can rally and at last give them something to maybe sweat about tomorrow."

Garcia's fellow 40-something European teammates Poulter and Lee Westwood also haven't brought back their previous Ryder Cup successes. Like McIlroy, neither has won a point so far.

Poulter is 0-2 after Saturday's afternoon's foursomes loss with McIlroy to Johnson and Morikama and Westwood is 0-2 after losses Friday morning and Saturday afternoon with partner Matt Fitzpatrick.

Asked afterward to comment about the ruling, he said, "Yeah, we didn't get it."