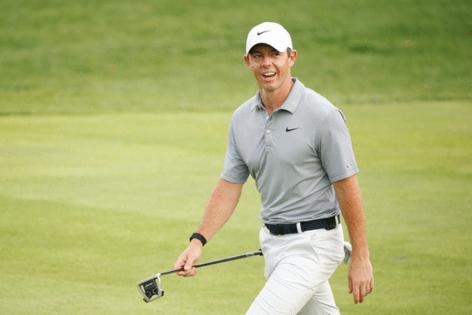 BALTIMORE — Rory McIlroy had not completed the opening round of a golf tournament in the lead since March, and it did not appear that trend would end Thursday at the PGA Tour’s BMW Championship at Caves Valley Golf Club in Owings Mills, Md.

But after absorbing his first and only bogey on the par-3 13th hole, McIlroy made a birdie on the par-4 15th and an eagle on the par-5 16th to join Sam Burns and defending champion Jon Rahm atop the leaderboard with 8-under-par 64s.

McIlroy, who entered the second leg of the FedEx Cup playoffs ranked No. 16 in the world and No. 28 in the FedEx Cup standings, last owned a share of a lead after the first round March 4, when he tied Corey Connors with a 66 at the Arnold Palmer Invitational at Bay Hill Club and Lodge in Orlando, Fla. The 32-year-old native of Northern Ireland has only one victory this year at the Wells Fargo Championship at Quail Hollow Club in Charlotte, N.C.

McIlroy took advantage of some giving fairways at Caves Valley. He successfully navigated 13 of 14 fairways, which is tied for first in the field, and averaged 318.2 yards off the tee, which is also tied for first.

“I think it lets you hit driver, first and foremost,” he said of the course. “I think there’s a lot of courses we play nowadays where a lot of fairways pinch in at 300, 310. It doesn’t allow the long hitters to hit driver a lot, last week being a pretty good example of that. Whenever you get a big golf course like this that allows the big hitters to hit driver, that’s usually a big advantage. Yeah, it’s just nice to get driver in your hand and be able to feel like you can let it fly a bit.”

McIlroy appeared to be in cruise control after recording six birdies in the first 12 holes Thursday. But he suffered a hiccup on No. 13 with that bogey.

After parring the par-4 No. 14, McIlroy regained three strokes on Nos. 15 and 16 to fortify his confidence.

“I played the par-5s very poorly the last few weeks,” said McIlroy, who has won four major championships but none since 2014. “Even the front nine today, not making birdie on either of the par-5s on the front side, I was sort of thinking, ‘Here we go again.’ It was nice to play the par-5s better on the back.”

Rahm, who captured the BMW Championship when it was played last September at Olympia Fields Country Club in Illinois, and Burns, who made his tournament debut, shot bogey-free rounds.

“It’s a lengthy golf course,” said Rahm, a 26-year-old Arizona State graduate who became the first from his home country of Spain to win the U.S. Open and leads the PGA Tour in top-10 finishes with 13 this year. “You’re going to have a lot of long irons into some of the holes. If you can put it in the fairway when it’s as soft as it is, you can be aggressive. Had a great ball-striking day and made a couple of good putts early on and had it going early and continued the mojo throughout the day.”

BALTIMORE — The sun crept above the hills at Caves Valley Golf Club in Owings Mills for the first day of the PGA Tour’s BMW Championship on Thursday morning. Buses unloaded crowds of fans, many wearing polos, khaki ...Read More

BALTIMORE — After winning The Northern Trust on Monday, Tony Finau couldn’t sleep. He just finished eating a celebratory dinner at Ruth’s Chris Steak House when his phone was flooded with thousands of messages from ...Read More

The NCAA is giving J.R. Smith the opportunity to light up the green.

The former Knick was granted eligibility to play golf for North Carolina A&T, where Smith is attending college this year after his NBA career ran its ...Read More

GREENSBORO, N.C. — It's not a stretch to say Webb Simpson would play the Wyndham Championship whenever it landed on the schedule. The tournament and the golf course have been too important to his career to miss it. He ...Read More

The 368-yard drive on the 11th hole on Sunday exemplified the talent that Cameron Champ brings to the PGA Tour.

The bogey-free final round reflected the mettle he has to hold off competitors and win trophies.

When it was over Sunday and he finished TPC Twin Cities' demanding 18th hole with a winning tap-in par, a 26-year-old seeking maturity and balance on tour pumped his fist, hugged his caddie, applauded fans and hid his face...Read More