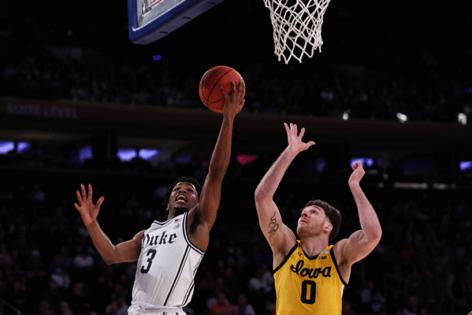 Inconsistent shooting raised concerns about No. 15 Duke’s offense in the early weeks of this college basketball season.

Jeremy Roach is doing his best to allay those fears and make the Blue Devils more potent.

The only returning starter from Duke’s Final Four team last season, Roach hit 8 of 18 shots, including three 3-pointers to reach double figures in scoring for the fourth time in his last five games. He matched his career-best scoring total.

“That’s a big-time game and Jeremy just, really, was in control of our team, from beginning to end scoring, play-making and leading,” Duke coach Jon Scheyer said.

Freshman Mark Mitchell turned in a strong performance on both ends of the court with 17 points for Duke (9-2) while fellow freshman Kyle Filipowski scored 12 points and grabbed 10 rebounds. Though he scored only two points, graduate student forward Ryan Young led Duke with 11 rebounds while blocking three shots.

Iowa 6-foot-8 junior forward Kris Murray, who entered the game averaging 21 points and 10.6 rebounds per game, finished with eight points on 3 of 9 shooting.

The 6-foot-8 Mitchell had the primary defensive assignment on Murray with 6-7 reserve freshman forward Dariq Whitehead also helping out.

“Mark and Dariq, that’s some pretty good length to put on Murray all night long,” Scheyer said. “He missed some shots and you need to be fortunate. But those guys consistently made him work, really, for everything.”