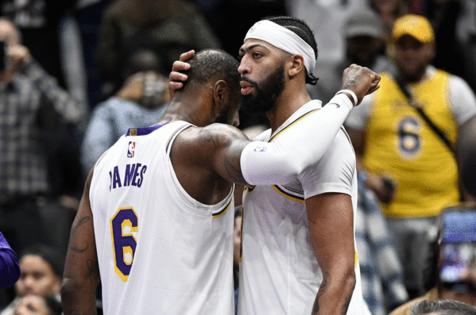 On the first, he launched a 3-pointer from the top of the key. On the next, he took a razor-sharp feed from Russell Westbrook and finished with an and-one layup that slowly circled the rim before finally falling in as Davis wagged a finger.

After two injury-plagued seasons, the 29-year-old is back to the dominant big man who helped lead the Lakers to a title. And he’s making it look easy out there.

Davis was again central in a 130-119 win over the Washington Wizards, giving the Lakers (10-12) eight victories in their last 10 outings. He had 55 points in 37 minutes, his highest-scoring game with L.A. and became the first Laker with back-to-back 40-plus-point games since Kobe Bryant in 2013.

In the last few weeks, Davis has recaptured the magic of his first season in L.A. – and in many ways surpassed it. His now nine-game streak of at least 25 points and 10 rebounds is the longest of his career, with crowd rumbles of “M-V-P” beginning to accompany his trips to the free throw line.

Davis hit from all over, putting up a Herculean shooting line of 22 for 30 from the field and going 9 for 9 from the free throw line. He hit a pair of 3-pointers, picking up where he left off with midrange touch with 44 points against Milwaukee.

Losers of five of their previous six entering Sunday, the Wizards didn’t present the same challenge as the Milwaukee Bucks, whom the Lakers knocked off Friday in their best win of the season so far.

But that was the point Coach Darvin Ham made to his team in a pregame meeting Sunday morning: It shouldn’t matter who they play.

“Regardless of who our opponent is, we have to represent ourselves,” Ham said. “The way we played in that game, that has to be us. Not because it’s Milwaukee, or because it’s Golden State, or the Sixers or Celtics. It doesn’t matter who we play – that’s how the Lakers have to play in order to be successful.”

The Lakers wound up needing Davis to close out. He scored 14 of his points in the final quarter, during which Washington briefly cut the Lakers’ once 27-point lead to nine. The play that pushed him over his previous Lakers scoring high was an and-one layup against former teammate Kyle Kuzma, which had the added bonus of fouling Kuzma out. Davis made the free throw – because he’s been doing everything the Lakers need from him lately.

He had help: LeBron James was a late decision to play with left ankle soreness, but had 29 points, 8 rebounds and 6 assists, and a fastbreak dunk in the closing minutes helped signal that the rout would hold. Russell Westbrook had 15 assists to go with 6 points and 7 rebounds. Lonnie Walker IV had 20 points.