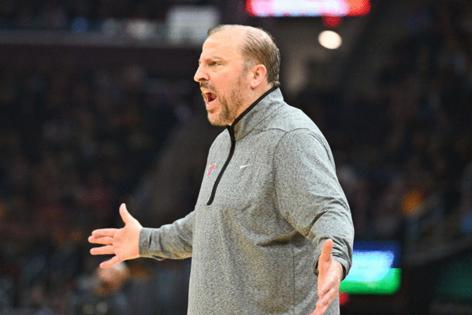 Facing the player that got away in trade negotiations, the Knicks turned up the intensity and toppled the Cavaliers on Sunday, 92-81.

Mitchell, who destroyed the Knicks earlier in the season in Cleveland, was ho-hum with 23 points on 8-for-23 shooting. He was stifled by Quentin Grimes, who logged 40 minutes and is finally healthy enough to give the Knicks the defensive stopper he was billed as.

On the heels of Saturday’s ugly defeat to the Mavericks, coach Tom Thibodeau tinkered with his rotation by removing Derrick Rose and Cam Reddish. Both logged DNPs. Miles McBride got more minutes but Thibodeau went heavy with the starters, with all five playing over 30 minutes.

The results were encouraging, especially on defense. Entering the night allowing over 116 points per game, they held the Cavaliers to their season-low for points on a putrid 35% percent shooting.

It snapped the Knicks (11-13) five-game losing streak at home.

The Knicks blew their chance to land Mitchell in the offseason, getting skittish over relinquishing too many future draft picks. Cavs team president Koby Altman swooped in and landed Mitchell for young players and three unprotected first-round picks.

According to multiple sources, Thibodeau was gung-ho about dealing for the three-time All-Star, believing he could make it work with a small backcourt of Mitchell and Brunson.

But negotiations stalled near the finish line, and the Cavs (15-9) made their push for contention. The Knicks were left with a team fighting to reach .500. Ahead of Sunday’s game, Thibodeau praised Mitchell for his impact on Cleveland.

“I think when you add all the things (Mitchell does) — the explosiveness off the dribble, high volume three point shooter, and to be shooting the ball the way he is, he gets to the line, he’s taking nine threes a game, shooting over 40%. You couple that with (Cavs guard Darius) Garland, that puts enormous pressure on you.”

Mitchell, a product of Westchester, was eager to play for the Knicks and now gets to be the visitor twice per year. He acknowledged feeling excited about playing at the Garden.

“I try to say it’s just a Sunday, 6 o’clock game. But I have friends and family coming in. It’s going to special,” Mitchell told the Cavs TV network. " I’ve never had this many people come to a game since my rookie season. So it’ll be fun.”

On this night, the Knicks had more fun.

When one plays for a traditionally regal college hoops program like the Kentucky Wildcats, it is no easy task to make history.