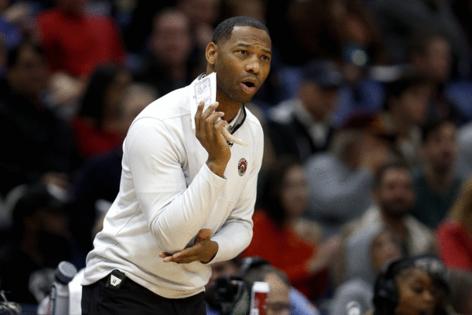 NEW ORLEANS — Jose Alvarado stalked the court like he owned the city. Until that happens, he’ll have to settle for consuming the Nuggets.

The Pelicans’ precocious guard channeled his inner Steph Curry, caught fire and torched Denver during a 121-106 victory here Sunday. Alvarado knocked down eight 3-pointers en route to a career-high 38 points. Pelicans fans serenaded him with “Jose — Jose — Jose “ chants every chance they got.

The Nuggets were helpless and frustrated.

With 2:03 left and the game already decided, Nuggets coach Michael Malone figured he’d seen enough. He offered some choice words to an official during a timeout to earn an ejection that had been steadily building.

Nikola Jokic’s 32-point, 16-rebound, eight-assist showing didn’t matter. On the heels of Friday’s ugly loss to Atlanta, the Nuggets were careless with the ball and didn’t match the Pelicans’ urgency. Denver turned it over 19 times for 18 Pelican points, playing into their up-tempo cadence.

Jamal Murray finished with 18 points on just 6 for 17 from the field, and Aaron Gordon managed 19 on 7 for 10 shooting. Pelicans focal point Zion Williamson logged 25 points, but it was Alvarado’s night. The crowd erupted when he checked out in the final minutes.

Denver fell to 14-9 and will head home to face Dallas on Tuesday riding a two-game losing streak.

The Nuggets sorely missed Michael Porter Jr., who missed his sixth consecutive game with a heel injury, and Jeff Green, who sat with a knee injury. Porter’s shooting could’ve aided Denver’s starters, and Green’s presence could’ve stabilized their reeling second unit. There’s a chance Green could be available for Tuesday’s contest. Without them, Denver’s bench was outscored 62-18.

Jokic did whatever he could to establish himself in the third quarter, including launching from 3-point range. He scored Denver’s first nine points of the second half to, seemingly, set a tone. But seven turnovers in the quarter undermined Denver’s cohesion, and the Pelicans exploited those opportunities. Trey Murphy hammered back-to-back dunks through the teeth of Denver’s defense, and Williamson punctuated the quarter with a mammoth alley-oop finish.

Between their aerial acrobatics and Denver’s inability to find offense outside of Jokic, New Orleans ran off a 28-21 quarter to stake an 87-81 lead going into the fourth.

In the wake of Friday’s humbling loss to the undermanned Hawks, Malone said he hoped his players would hold themselves accountable. Prior to Sunday’s tip-off, Malone held himself to the same standard.

“Did I do my job in terms of preparing our team to play?” he asked himself when auditing the defeat and preparing for the Pelicans.

When asked specifically whether he got any sense from his players that they’d looked inward, Malone said the most telling answer would come within the first six minutes of Sunday’s game.

To the Nuggets’ credit, their effort was noticeably better. Jokic set the tone early, pummeling the Pelicans in the paint. He logged 21 points on 8-of-12 shooting, with nine rebounds in the first half. Murray, with three 3-pointers, offered supplementary help. Their tandem engineered a slight 60-59 lead at the break.

Though Williamson (14 points) was a menace inside, the Pelicans rode Alvarado’s blistering 3-point shooting. The reserve guard, known mostly for his tenacious defense, caught fire over the first two quarters. He led the Pelicans with 19 points on five 3-pointers, almost single-handedly doubling Denver’s scoring output off the bench. New Orleans’ reserves outscored the Nuggets 30-10 in the first half.