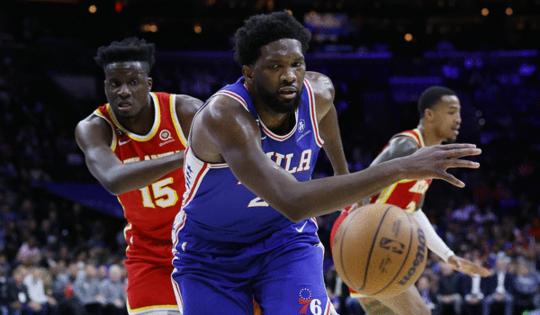 Embiid’s defensive play that all but sealed the game — which complemented his 30 points, eight rebounds and seven assists in his return from a foot injury — lifted the 76ers to a 104-101 Monday night at the Wells Fargo Center.

The Sixers’ seventh win in nine games required a rally from 16 points down in the first half to set up the down-to-the-wire finish.

After a pull-up jumper by the Hawks’ Dejounte Murray gave the Hawks a 100-97 lead with less than two minutes remaining, Embiid followed with a spinning finish and, after the Sixers’ defense forced a shot-clock violation, he hit the go-ahead jumper with 18.6 seconds to play.

The Sixers (12-9) briefly took an 80-77 lead on a corner three-pointer by Georges Niang late in the third, then again on two consecutive buckets by Tobias Harris and a driving layup by Matisse Thybulle to make the score 91-88 with less than nine minutes remaining. Both teams went back and forth after that.

One night after blasting the Orlando Magic by 30 points Sunday night, the Sixers struggled offensively to start Monday’s game. They shot less than 40% for much of the first half to fall into that 16-point deficit. Guards Shake Milton and De’Anthony Melton, who have filled in admirably for Harden and Maxey, shot a combined 12-of-32 from the floor.

It was the fifth game in seven nights for the shorthanded Sixers, who continue to play without star guards James Harden (foot tendon strain) and Tyrese Maxey (fractured foot). The Hawks were also taxed physically, losing Sunday night in Miami before traveling to Philly.

Harris finished with 24 points on an efficient 10-of-18 shooting and 10 rebounds for the Sixers.

Six Hawks finished in double figures, led by Trae Young’s 18 points and 10 assists, 18 points on 7-of-11 shooting from Philly native De’Andre Hunter and Justin Holliday’s 16 points off the bench including a 4-of-5 mark from three-point distance.

The Sixers immediately go back on the road for their next three games at the Cleveland Cavaliers Wednesday, the Memphis Grizzlies Friday and the Houston Rockets next Monday.