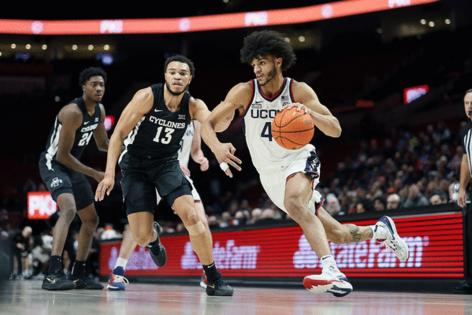 UConn, 8-0, has won each of its games by 15 points or more and has the seventh-best scoring margin in the nation.

Donovan Clingan, the 7-2 center from Bristol who claimed tournament MVP honors after a 15-point, 10-rebound performance against Iowa State, was named Big East Freshman of the Week on Monday. That recognition, swept by UConn’s Alex Karaban in the first two weeks of the season, came after Clingan shot 61.1% from the floor and averaged 1.7 blocks through the three tournament games.

Tristen Newton, a transfer guard from East Carolina, was named to the Big East honor roll after showing out with a 23-point game against Oregon. He averaged 15 points, 5.7 assists, 4 rebounds and 2 steals in the PK Invitational.

Creighton, the only other ranked team from the Big East, moved up to No. 7 after two wins over ranked teams in Texas Tech and Arkansas and a loss to new-No. 4 Arizona in the Maui Invitational. St. John’s (7-0) was the only other team in the conference to receive a vote.

There was a shake-up in the top 5 after both North Carolina and Kansas dropped games. The Tar Heels, No. 1 last week, dropped 17 spots down to No. 18 after losing to Iowa State and Alabama, both teams the Huskies beat on their way to the tournament title. Kansas’ loss to Tennessee in the Battle 4 Atlantis dropped the Jayhawks six spots to No. 9.

UConn is ranked No. 10 in both offensive and defensive efficiency, according to KenPom metrics. The Huskies are No. 37 in the NCAA for effective field goal percentage (56.8%), have the ninth-best rebounding margin in the nation and have forced 17 turnovers per game.

UConn returns to action on Thursday, when they’ll take on Oklahoma State in the Big East-Big 12 Battle inside Gampel Pavilion in Storrs at 6:30 p.m.