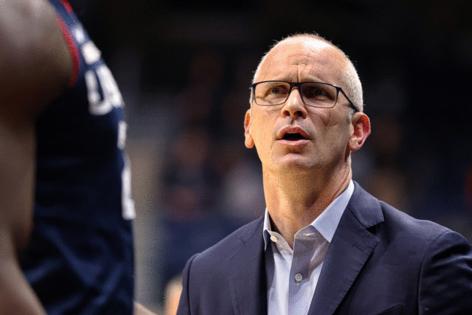 That doesn’t work every night, as competition gets stiffer. The Huskies were due for a rock fight, a game they would have to win with grit. They got one, and got it done in the Phil Knight Invitational semifinals Saturday and wrested the game away from Alabama, 82-67, in a match of top-20 teams at the Veterans Memorial Coliseum.

The Huskies jumped out to a 15-point lead late in the first half against No. 18 Alabama, but the Crimson Tide slowly grinded that lead down to zero, tying the game several times in the second half as UConn’s top players got into foul trouble.

With the game tied at 50 with 9:21 to play, the Huskies got their offense in gear and staged a 23-4 run to blow the game open. Adama Sanogo, who finished with 25 points, took over the game down the stretch, scoring inside and hitting a big 3-pointer. Jordan Hawkins scored 16, Alex Karaban 12 and Joey Calcaterra 10 for the Huskies (7-0). Tristen Newton scored nine, all over the final 10 minutes, going 6 for 6 from the line.

Alabama (5-1) struggled from the floor, held below 40% by a tenacious Huskies defense. The Crimson Tide turned the ball over 16 times in the first half, while getting off only 23 shots.

The game started out with rugged, physical defense on both sides. UConn turned Alabama over nine times in the first nine minutes, but the Huskies were not efficient on offense and the game was tied, 10-10, after 8 1/2 minutes.

Newton, who scored 21 in the first half against Oregon on Friday, was held scoreless in the first half by Alabama, but UConn got scoring elsewhere. Calcaterra came off the bench to score five quick points as UConn jumped ahead. That sparked a 14-0 run to give the Huskies a commanding lead.

The Huskies moved ahead 33-18 on Hawkins’ 3, one of three he made in the half, but then Alabama began to claw back in it. A couple of offensive fouls called on Sanogo helped change the momentum, and the Crimson Tide finished the half with a 12-2 run. The teams exchanged some words at midcourt as the half ended, UConn taking a 35-30 lead to the locker room.

Alabama continued to control play in the second half, as fouls began to mount for UConn, and tied the game at 44 on two free throws from Noah Clowney with 13:11 to play.