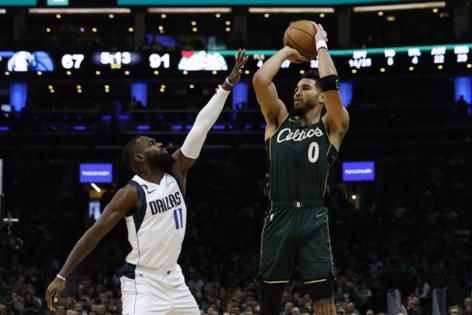 BOSTON — Jayson Tatum has said that while being an NBA MVP has always been a dream of his, it’s not his singular mindset this season. The Celtics star knows – especially after last year’s painful Finals loss – that if he leads his team into the thick of the championship hunt, he’ll be at the top of that conversation.

While Tatum led the Celtics over another MVP candidate’s team on Wednesday night, it was another reminder that through the early stage of the season, his team is much more complete, more dynamic and more dominant than any of the other players on the list.

With “MVP!” chants raining down on him all night, Tatum lifted his teammates again. The forward scored 37 points, and while Luka Doncic topped him with 42 points, his surrounding cast was far better. Jaylen Brown added 31 and four other Celtics scored in double figures as the Celtics’ league-leading offense produced another dominant performance in a 125-112 victory over the Mavericks at TD Garden.