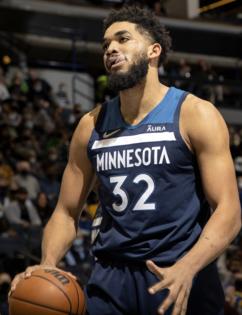 The Timberwolves' All-Star, for the first time, had practiced in some capacity with the team after a non-COVID illness.

"I'm still recovering, I'm still getting better," Towns said. "... I know it sounds weird I'm talking like this, but this is as loud as I can get. This is as much as I could give you."

Towns didn't want to go into detail about the illness that has kept him off the floor and away from Mayo Clinic Square, but he did say there were some concerning moments. He said he was hospitalized and only Saturday, when he attended the Wolves' Fanfest, did he get the OK to walk around and leave his house.

"There was more drastic things to worry about than basketball at that moment," Towns said. "I wasn't too worried about basketball for a while. But I miss the game, I love the game. I miss these guys. Sick and tired of recovering at the house and not being able to leave and do anything."

Even as he is slowly working his way back to game speed — he is practicing only in non-contact situations — he said he is still on track to play in the team's season opener Oct. 19.

"Right now it looks good," Towns said. "Obviously I'm going to take my time and do whatever the [doctor] recommends and let my body catch up and get to that feeling."

Towns declined to say what he was battling, for his sake and his family's sake, he said.

"Keep it private. We don't have to put people through that again. It was a tough time for all of us," Towns said. "I'm just happy to be back playing basketball.

The 6-11 Towns said he was down to 231 pounds, which he said was a product of both his offseason work to slim down and the recent illness he battled.

Part of that weight loss may have to do with where Towns will be playing on the floor this season. After the acquisition of Rudy Gobert from Utah, Towns will be downshifting and playing more of the four, or power forward position. That might require him to guard players who are smaller and quicker than those he normally might guard at the center spot, where Gobert will primarily be playing.

"That's a wild turn of events, being competitors like that against each other and now we're teammates," Towns said. "That wasn't on my bingo card this summer. I'm just real happy that we get to make each other better."

It will still be awhile before the two take the floor together. Neither will play in Tuesday's preseason opener in Miami, coach Chris Finch said. The Wolves are resting Gobert in the early part of the preseason, after he played in the Eurobasket tournament this summer. The team is hoping they can get some time on the court before the regular season opener.

"People talk about how a two big-man tandem hasn't been able to work, especially in today's NBA," Towns said. "... He's one of the best defensive players we've ever seen in this NBA. So to be able to play off of each other and share our knowledge on both sides of the basketball and both sides of the court and make this team better … that's important."