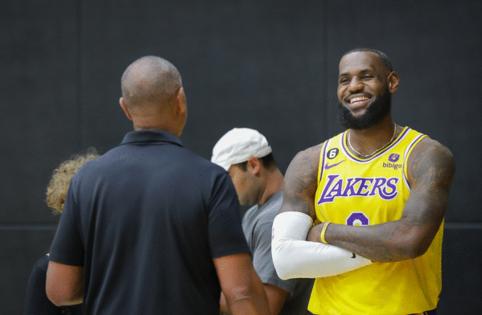 With a new coach in Darvin Ham, a new system and just six players returning from last season’s team, the plan for James playing preseason games is being worked out.

The Lakers’ preseason opener is Monday night against the Sacramento Kings at Crypto.com Arena.

Ham said he and James haven’t had a conversation about how much the superstar will play in the preseason.

“My staff and I, we’ll get to that, man,” Ham said. “We don’t want to go crazy, but we also want to have it be enough where we can establish a rhythm, can be in game mode with a good rhythm going into the regular season.”

Ham said that they will “figure all of that out” in the coming days.

“Obviously we have those type of things on our board and on our laundry list of things to get done,” Ham said. “But our focus has totally been on trying to establish a style of play on both sides of the ball, establish our principles and make sure we’re executing the basic foundation of who we are and what our identity will be. But definitely my coaching staff and I, we have had light discussions about what that’s going to look like, how many preseason games, how many minutes.”