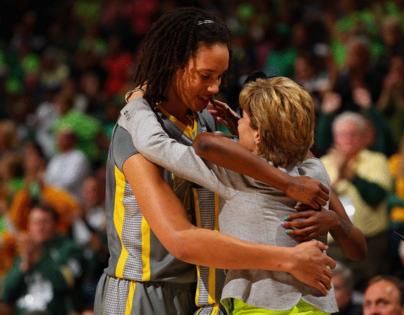 FORT WORTH, Texas — With the sincerity of a parent, and the conviction of a preacher, Kim Mulkey looked at me and said of her Brittney Griner, “That’s someone’s child. That’s someone’s baby.”

Even if you disagree with her.

This exchange happened in 2013, after Baylor beat TCU in Fort Worth when I asked the then Baylor coach about how she handled Griner’s critics, who existed mostly because she committed the unpardonable sin of not looking feminine.

Kim Mulkey, now the head coach at LSU, is no different from the idiots she once criticized for going after the baby she would protect only when it served her purposes to win basketball games.

Mulkey should be commended for her fearless willingness to put herself out there verbally, and shamed for her pathetic double standard when it comes to Griner.

When Mulkey recruited Griner out of Houston, a process that took years, she sold herself as the de facto parent who would watch out for the young person as if she was her own.

When Griner was the best player in college basketball at Baylor, which included the 40-0 national title season in 2012, she was the subject of some of the meanest, nastiest taunts ever conceived, and Mulkey stood up for her.

Now, momma has washed her hands of that baby over politics.

Mulkey is no momma. She re-exposed the worst of her profession who uses kids to meet their own selfish needs.