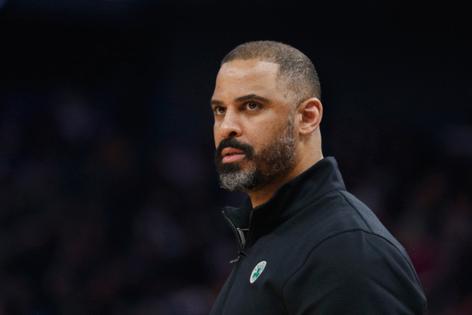 BOSTON — The Celtics have suspended coach Ime Udoka for the entirety of the 2022-23 season for violations of team policies, the team announced on Thursday night, without a guarantee that he will return.

The release from the Celtics, sent at 9:21 p.m. Thursday, read: “The Boston Celtics announced today that the team has suspended Head Coach Ime Udoka for the 2022-23 season for violations of team policies. A decision about his future with the Celtics beyond this season will be made at a later date. The suspension takes effect immediately.”

First reported late Wednesday night, Udoka is being suspended after he had an improper intimate and consensual relationship with a female member of the team’s staff, which is deemed to violate the organization’s code of conduct, according to multiple reports.

The Celtics did not say in the release if they would hold a press conference to address Udoka’s suspension. Media day is scheduled for this Monday.

Details of the developing situation remain, but on the eve of training camp, the news of Udoka’s looming suspension is a stunning development and presents a major hurdle that could derail a Celtics season with high expectations. Udoka, in his first season, guided the Celtics to an impressive midseason turnaround and a run to the NBA Finals. Three months later, the Celtics are entering this season as the favorite to win the NBA championship.

The 45-year-old Udoka became a first-time head coach last year when the Celtics hired him to replace Brad Stevens, who took over as the Celtics president of basketball operations. Udoka, who played seven seasons in the NBA, was a longtime assistant coach for the San Antonio Spurs under Gregg Popovich and had two more assistant jobs before joining the Celtics. After a rough start to his first season, the Celtics bought into Udoka as they transformed into the best defense in the NBA, and the players had glowing praise of him.

“When you have a coach who’s willing to hold you accountable, and not just you, but everyone on the team the same way, that’s how you know you have the makings of a great coach who’s trying to get somewhere special,” Marcus Smart said during the NBA Finals last June.

The Celtics are expected to make assistant coach Joe Mazzulla the interim coach in Udoka’s absence, according to multiple reports. The 34-year-old Mazzulla is a Rhode Island native who starred for Bishop Hendricken High School before playing college basketball at West Virginia, but he doesn’t have extensive coaching experience. Mazzulla’s only head coaching job came at Fairmont State, a Division 2 school in West Virginia where he coached for two seasons before Stevens hired him as an assistant in 2019.

Still, Mazzulla is highly respected within the Celtics organization. When Udoka was hired last year, Mazzulla was the only holdover from Stevens’ staff to stay on as an assistant. Mazzulla coached the Celtics’ summer league team in 2021 and also interviewed for the Utah Jazz opening this summer — before fellow Celtics assistant Will Hardy got the job — even though he’s not a front bench assistant with the Celtics.

“I love Joe,” Celtics star Jayson Tatum said in June. “I think just being around him … you could tell how passionate he is about the guys and his craft. He’s gotten so much more knowledgeable, more detailed, just vocal. More comfortable in his role as a coach. You’ve seen a growth from his first year.

“He’s helped me out tremendously as a player and as a person. I can’t say enough good things about Joe. Everybody appreciates him, what he brings to this team. I’m glad that we have him.”

After a promising offseason that included the acquisition of Malcolm Brogdon, it’s turned upside down as the C’s head into camp. Danilo Gallinari tore the ACL in his left knee, and Rob Williams will miss the beginning of the season to have left knee surgery. Now, Udoka’s suspension has created great uncertainty about the Celtics’ future.

DETROIT — The Pistons are adding another veteran to their core of young pieces ahead of the start of training camp.

Detroit has agreed to trade big man Kelly Olynyk and guard Saben Lee to the Utah Jazz in exchange for ...Read More

The NBA All-Star forward who underwent surgery in July 2021 to repair an injured anterior ...Read More

BOSTON — Celtics coach Ime Udoka is facing the possibility of serious discipline — including a potentially “significant suspension” — because of a violation of team rules, according to a report by ESPN’s Adrian...Read More

PHILADELPHIA — Ben Simmons said during an interview on former teammate JJ Redick’s podcast that he did not feel supported by the Sixers while dealing with mental health struggles in the aftermath of their 2021 playoff ...Read More

MINNEAPOLIS — Jenna Wegner is a lifelong Timberwolves fan who, in the past few trying and tumultuous years, realized "once and for all" she was a woman. She began taking steps to live as her true self and began the ...Read More