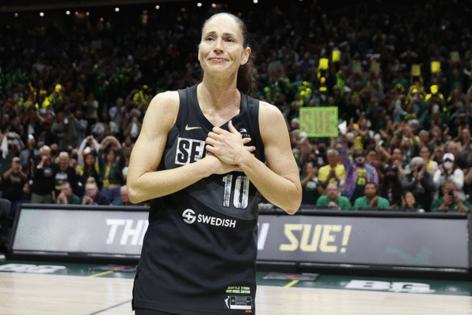 SEATTLE — It was one of those nights where an extra marine layer of tension hung in the air as the Storm's season, and Sue Bird's career, hung in the balance. But eventually, that tension gave way to the melancholy that always attaches itself to a legendary player walking away from the game.

It took 40 minutes of intensity, brilliance and absurd stress, an epic back-and-forth struggle with the highest of stakes, before the outcome was determined. And for the Storm, who had the will but not the way, the ending came with stark finality.

The Storm on Tuesday were eliminated, 97-92, by the Las Vegas Aces, who took the best-of-five series in four games. But outside of the Aces locker room, perhaps, that will not be the bullet point, nor the lasting memory, when this game is recalled, as it is certain to be.

No, it will be known as the last time the great Sue Bird took the court. And it was the sight of her leaving the court for the final time that touched most poignantly at the heartstrings. Everyone knew this day was coming, but it still was jarring to think that after 21 years and a storehouse of memories, she would not play at this level again.

As a gracious Vegas coach Becky Hammon said afterward, "Sue had a career kids dream of, and she lived it. Her thumbprint on the game is forever etched ... She's a beautiful mind. Her jumper going left is killer, too, but her mind for the game is one of a kind, so you have so much respect for her."

Bird, still emotional an hour later, said the end felt "surreal," but she leaves with no regrets and no notions of changing her mind.

"No, I don't have second thoughts," she said. "Of course, my body feels good. And so that can be tricky. Or it can trick you But there's a reason why I felt comfortable, and I felt confident in this being my last year. Being able to say that out loud was a big hurdle. And once I kind of jumped over that, I knew I did the right thing, because how I felt afterwards.

"Am I gonna miss basketball? Absolutely. There's going to be nothing like this. I don't think I'll ever be able to replicate it. I'm not even going to try. But now I know I made the right decision."

When the game ended, the Storm's hopes of a miracle comeback having expired, Bird immediately consoled some of her teammates, then joined a Storm group huddle.

Afterward, she took a couple of steps toward the tunnel before turning around and joining the handshake line with Vegas as a thunderous chant of "Thank you, Sue" rung out from the 11,328 in attendance.