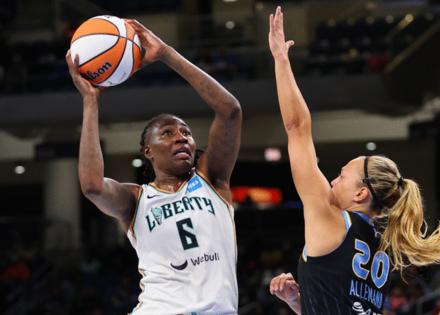 Nothing seemed to work for the reigning league champions. Kahleah Copper and Candace Parker fumbled passes at the top of the key. Allie Quigley — the most surefire shooter on the Sky — air-balled a 3-pointer with less than a minute left. And the New York Liberty pounced on every mistake, clawing back from a six-point deficit with 3:32 to play.

A pair of Natasha Howard layups and a 3-pointer and midrange jumper by Sabrina Ionescu gave the Liberty a three-point lead with 2:01 left and they never looked back, finishing the game with a 13-0 run for a 98-91 upset in Game 1 of the best-of-three series.

Game 2 is back at Wintrust Arena on Saturday, with the second-seeded Sky suddenly facing elimination.

The Sky welcomed the challenge of defending their title as fans were handed rally towels inscribed with the message “Recrown Skytown” when they entered Wintrust. The Sky carted out the WNBA championship trophy to center court during player introductions, a manifestation of the pressure on the reigning champions as they seek the league’s first back-to-back titles in two decades.

But the greatest pressure came from the seventh-seeded Liberty, who entered the postseason desperate after securing one of the last playoff spots.

They torched the Sky from long range, shooting 44% from behind the 3-point arc. The hot shooting stretched the Sky defense to a vulnerable width, creating lanes for Ionescu to carve apart with a lethal pick-and-roll offense. She and Howard each scored a game-high 22 points.

Liberty center Stefanie Dolson — a key role player on last year’s Sky — was lethal from long range as she dropped in three 3-pointers and finished with 13 points.

Howard’s bruising presence battered the Sky the most. Despite a deep Sky frontcourt that rotates Parker, Emma Meesseman and Azurá Stevens, they didn’t have an early answer for Howard’s physicality in the paint.

The Sky regained control amid a breathless third quarter, but the Liberty never fell behind by more than seven points. Copper led the Sky with 21 points, Quigley added 18 and Parker had 17 — but the Sky couldn’t counter the Liberty defensively in the final stretch.

A year ago, the Sky were in a similar position as the Liberty after squeaking into the playoffs with a .500 record. They beat the Dallas Wings in a single-elimination first-round game to spark their title run.

The WNBA revamped the first round this season, expanding to a best-of-three series. The new structure was a welcome change for Sky players and coaches, who felt the previous one-and-done first round didn’t provide adequate competition.

As the No. 2 seed, the Sky got to host the first two games and will travel to New York for the final game — if they can avoid elimination Saturday.