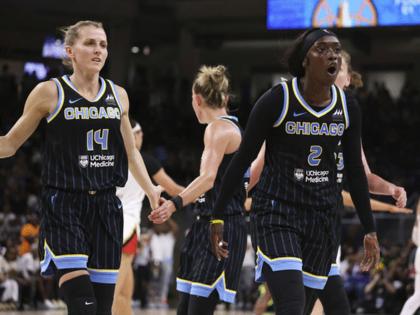 CHICAGO — The Chicago Sky entered this season with a neon target on their backs.

It’s a burden for any team that wins a title in the WNBA, a league in which teams rarely repeat — and often struggle to get back to the Finals in consecutive seasons.

Winning back-to-back titles hasn’t been accomplished in two decades since the Los Angeles Sparks did it in 2001 and 2002. But with the No. 2 seed in the playoffs after a franchise-record 26-win regular season, the Sky are well-positioned to run it back.

This footing was nearly unimaginable a year ago for the Sky, who open their best-of-three first-round series against the seventh-seeded New York Liberty on Wednesday night at Wintrust Arena. But captain Courtney Vandersloot believes the shift from unexpected underdog to reigning powerhouse won’t change her team’s mentality.

“Last year, we felt like our backs were against the wall,” Vandersloot said. “This year, we obviously want to win, but we have the confidence that we have the group to do it. We know what it takes.”

This time last year, the Sky weren’t even sure if they would make the playoffs.

A loss to the Minnesota Lynx on Aug. 21 had dropped their record to 11-12. After a heralded homecoming, Candace Parker was battling her way back onto the court, having missing a third of the season with ankle injuries. It wasn’t clear if the Sky had enough in the tank to break even on the season, let alone reach the postseason.

Coach James Wade felt last year’s roster still was defining its style of play in the early rounds of the playoffs.

“It’s a different team, different year, different expectations,” Wade said. “Last year around this time, we had a losing record and we were still trying to find out who we were. We started this season off, and after five or six games we kind of figured it out.”

This year’s success began with a series of offseason transactions: re-signing Vandersloot after a heated negotiation period; signing free agent Emma Meesseman, who had been a teammate of Sky players in Russia; and reinforcing the bench with Julie Allemand and Rebekah Gardner.