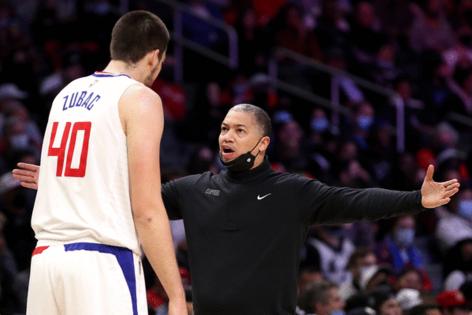 LOS ANGELES — The Clippers were none too pleased last season that they played five games in seven nights five different times, tied for the most in the NBA. In 2022-23, they will have none of that — a significant change for an older roster that aims to keeps its players as fresh as possible ahead of the postseason.

Another potential plus: As those playoffs approach, the time off in the Clippers’ schedule increases. In the season’s final five weeks, they will have six breaks between games of two days or more.

That doesn’t mean the Clippers won’t face challenging stretches toward what is an explicit pursuit of the franchise’s first NBA championship. That loosening of the schedule in the season’s final weeks? It’s because they will have already played 61 games by the mid-February All-Star break — the second consecutive season the Clippers will have reached that figure, which ties the 2017-18 Minnesota Timberwolves and a long-forgotten 1950s franchise for the most in NBA history.

With the NBA schedule released Wednesday, here is a look at what could be among the most difficult portions of their upcoming 82-game regular season:

In December, as the Clippers pass the quarter-pole of their regular season, they leave for two East Coast trips. The first is four games in seven days — including departure date — between Dec. 4-10, in Charlotte, Orlando, Miami and Washington. After 11 days in Los Angeles, they take off against for a five-game trip spanning Christmas to New Year’s eve: Beginning Dec. 23 in Philadelphia, they will then play at Detroit on Dec. 26, Toronto on Dec. 27, Boston on Dec. 29 and Indiana on Dec. 31.

Take the stress that builds before the trade deadline and add the accumulated fatigue as the season passes its halfway mark, and it’s easy to understand why players and coaches regard the All-Star break as an oasis. That figures to hold true for the Clippers. Between Jan. 18 and Feb. 16, they will play 15 games, with 14 played on one day of rest or less. Eleven of those 15 games are on the road — though one is against the Lakers, which will allow them to stay in Los Angeles. All of this is happening at a time when the trade deadline will occur, which adds uncertainty to any locker room.

Opponents during that stretch include several who could be playoff teams or strong contenders: two against Dallas and Milwaukee and one each against the Lakers, Cleveland, Chicago, Brooklyn, Golden State and Phoenix.

Did we mention the Clippers want to be rested and primed for the postseason? Since Kawhi Leonard and Paul George’s arrival in 2019, that has most often taken the form of not playing their stars on consecutive nights, though Leonard had resumed playing some back-to-backs during his last full, healthy season, in 2021. One trade-off for having zero five-in-seven stretches, it seems, is playing 15 back-to-backs, which is one more than last season.