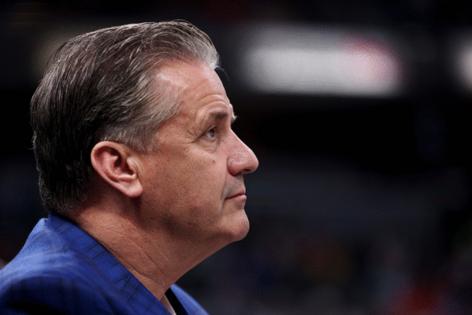 That was a good night for the Cats, but a bad one for the hope of competitive basketball on this trip. Halfway through this four-game Bahamas visit, UK is still looking for a test.

Kentucky defeated undersized Tec de Monterrey, 102-40, on Thursday night. The winning margin was actually higher than the night before — when UK beat the Dominican select team by 52 points — and this game was far less competitive from the start.

Sahvir Wheeler and Chris Livingston led the Wildcats in scoring with 14 points each. Wheeler also had 10 assists, Livingston added 10 rebounds, and national player of the year Oscar Tshiebwe tallied 10 points and 14 rebounds.

The roster for Tec de Monterrey — a college team from Mexico — featured just one player taller than 6-foot-5 (and he was only 6-7). The Cats made a clear advantage of the size gap, not to mention the talent one.

“It kind of feels like Oscar’s out here with a bunch of sixth-graders,” quipped ESPN play-by-play announcer Tom Hart midway through the first half. At that point, Tshiebwe had pulled down the same number of rebounds as the entire Tec de Monterrey team combined.

Kentucky outscored Tec de Monterrey, 60-12, in the paint. The Cats had 35 second-chance points. Tec had zero. On the boards, UK outrebounded its opponent, 65-22, and the Wildcats swatted eight shots on defense. Tec shot 25.8% from the floor and was just 9 for 36 on 2-point shots.

Tec de Monterrey was projected to be the least formidable of Kentucky’s opponents in the Bahamas this week, so there wasn’t much to glean from this matchup.

By halftime, the Cats already led 53-21 and had made 19 of their 27 2-point attempts. UK was also outrebounding Tec, 30-8, at the break, and Tshiebwe had seven boards — just one fewer than the entire opposing team.

Kentucky didn’t let up any in the second half.

In the opening minutes after halftime, Wheeler led off a fast break that concluded with a pass to Cason Wallace, who lobbed it up at the rim for Toppin to flush home the alley-oop, a transition play that happened so quickly a ball boy trying to wipe the floor under UK’s basket had to scurry to safety on the baseline.

By the time the first Kentucky walk-on hit the court with 4:34 left, the Cats led by 62 points.

Kentucky will get a day off Friday before matching up with Carleton University at 6 p.m. Saturday. Like all games this week, this one will be televised on the SEC Network and broadcast on the UK radio network, as well as live audio streaming on UKAthletics.com.

The Carleton Ravens, based in Ontario, are a powerhouse in Canadian college basketball, the defending national champions and the winners of 10 of the last 11 national title games.

This will be the Ravens’ third game against American collegiate competition in recent days, and they’re still looking for their first victory. Florida State defeated Carleton, 98-64, on Monday night. Northeastern beat the Ravens, 104-91, last weekend.