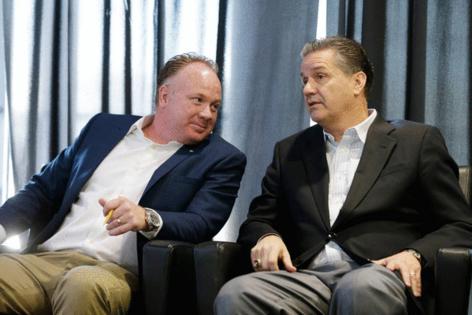 Hours before his team’s second exhibition game in the Bahamas, Calipari went on the offensive again in a push to build a new practice facility for his program in an interview with The Athletic.

As he has multiple times this summer, Calipari pointed to recent facility investments in football and non-revenue sports as proof it was time for men’s basketball to take its turn at the front of the line. But this time Calipari took the point a step further.

“The reason is, this is a basketball school,” Calipari told reporters in the Bahamas. “It’s always been that. Alabama is a football school. So is Georgia. I mean, they are. No disrespect to our football team. I hope they win 10 games and go to bowls. At the end of the day, that makes my job easier and it makes the job of all of us easier. But this is a basketball school. And so we need to keep moving in that direction and keep doing what we’re doing.”

That comment did not sit well with Kentucky’s football coaches.

Stoops quote tweeted a link to the Athletic story with the basketball school quote with the note, “Basketball school? I thought we competed in the SEC? #4straightpostseasonwins.”

In February, UK’s Board of Trustees approved a $30 million project that would include the construction of a new indoor track facility, renovation of the Nutter Field House for the football program and the replacement of video boards at Kroger Field.

The men’s and women’s basketball programs have practiced in the Joe Craft Center since 2007. Since then, a new football training facility was constructed and Kroger Field was renovated for a total price of more than $150 million.

Still, UK Athletics Director Mitch Barnhart pushed back at Calipari’s suggestion men’s basketball had been neglected earlier this summer in an interview with The Courier Journal, pointing to the $310 million renovation to the Central Bank Center and Rupp Arena, which is owned by the city of Lexington but was financed in part by increased rent payments from UK. In 2018, UK spent $4 million to upgrade the locker rooms at the Joe Craft Center.

“I’ve got a wonderful president,” Barnhart said. “He is very supportive of college athletics on our campus, but we fit into our university plan. I want to make sure we’re always part of that. I’ve got some teams that don’t have hardly any facilities at all. I say hardly, but our men’s tennis team just went to the national finals and they’ve been wanting a new facility for 15 years.

Stoops is next scheduled to speak with reporters Saturday after his team’s first preseason scrimmage. Calipari’s team was to return to action in the Bahamas at 7 p.m. Thursday against Tec de Monterrey.