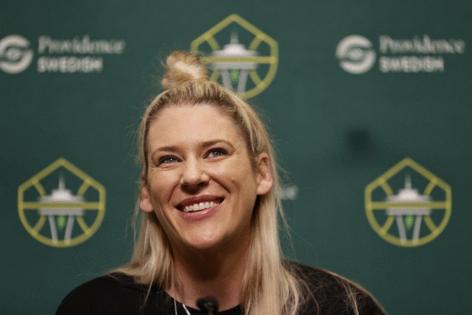 SEATTLE — While 41-year-old Sue Bird puts the final touches on a remarkable career, her former Storm teammate Lauren Jackson is making an improbable comeback and returning to international competition next month at the age of 41.

“I can’t,” Jackson said in an interview last week while in Seattle to visit Bird. “It’s so bizarre. When I started playing again, I honestly had no expectations because I just didn’t want to put that on myself.

“I just wanted to get back out there and see what happens. Not every day was smooth. Definitely, more than a few ups and down, but mostly I’ve enjoyed it. … And certainly, I’ve enjoyed being able to play without pain.”

Jackson, who stopped playing in the WNBA in 2012 and retired from basketball in 2016 after knee injuries derailed her career, began a comeback 10 months ago that led to Tuesday’s announcement when the Australian star was named to her country’s FIBA World Cup team for the tournament in Sydney.

Storm players Ezi Magbegor and Stephanie Talbot as well as Sami Whitcomb, who played for the Storm and the Washington Huskies, were also named to the Opals’ 12-player roster.

Australia is in Group C and the United States is in Group A in the tournament scheduled for Sept. 22-Oct. 1.

During her five-year retirement, Jackson became a mother of two boys, Harry and Lenny, and was inducted in the Naismith Basketball Hall of Fame.

At the time, Jackson had no intentions of playing again after having a partial replacement of her right knee and gaining 50 pounds.

Jackson credits Bird for delivering a big assist in her comeback and advising her to try medical cannabis.

“I spoke to Sue a couple of years ago about what CBD oil had done for her and how it helped her recover,” Jackson said. “I wanted to get fit again after I had my kids. I was finding it hard to get consistency with my training without blowing up with injuries and inflammation and stuff.

“I went on a trial at home … and was able to get that consistency without going on harsh medications and things like that. It just helped my recovery and my body get through it without having to take some of the harsher things that affected me before.”

In the past, Jackson acknowledged a reliance on painkillers, anti-inflammatories, sleeping pills and anti-depressants toward the end of her career, which prompted an early retirement.

In April, Jackson began playing for hometown Albury Wodonga Bandits and had several dominating performances in about a dozen games in Australia’s second-tier semiprofessional league.

“Oh, heavens no,” the four-time WNBA MVP said smiling. “I can’t do the things I did 20 years ago, but who can? … I can still play and be effective.

“It’s no secret, I was never happy about how my career ended. And I don’t know how this whole thing will end this time. But I’m happy to be out there.”