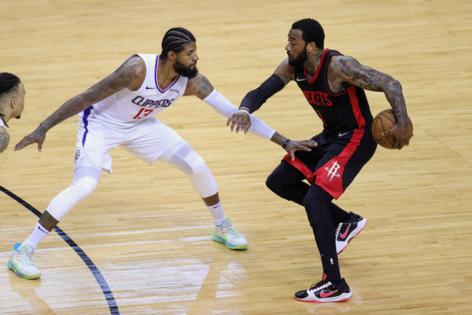 The Clippers and starting center Ivica Zubac on Tuesday agreed to a three-year, fully guaranteed contract worth $33 million, according to a person familiar with the terms not authorized to speak publicly. It locks in the 25-year-old 7-footer who in more than three seasons with the team has developed into one of the league's best young rim protectors and most durable players at any position, whose improved passing has also allowed the Clippers' offense to expand.

The Clippers had until Wednesday to exercise their team option for Zubac and paved the way for the extension by declining it. His deal came one day after point guard John Wall was said to be intent on formally committing to the Clippers on Thursday, after he clears waivers and can agree upon terms once free agency opens. His availability is possible after Wall's buyout with the Houston Rockets became official Tuesday.

Those developments follow the team's May contract extension with forward Robert Covington — worth two years and $24 million — that kept the Clippers from losing him in unrestricted free agency. In the process, it kept on the roster a supremely switchable and elite help defender who is also a 36% career 3-point shooter. Covington made 45% of his 3-point attempts in 23 games with the Clippers last season.

Team owner Steve Ballmer on Tuesday attended a ceremony at the Michelle and Barack Obama Sports Center to open the 350th and final renovated public court in Los Angeles, a four-year undertaking funded in part by a gift from Ballmer and his wife, Connie. After the ribbon-cutting, Ballmer rubbed his palms together when asked about fair expectations for his team.

"We'll see what happens as free agency opens up and everything else, but I think the sky's the limit for our team," Ballmer said. "The sky is the limit and it will be kind of our effort and our energy, because of course you have to have a little bit of good luck to win the Larry O'Brien [NBA championship] Trophy, which is what we'd really like."

News of Wall's intention to sign increased the team's title odds overnight Tuesday at BetMGM from +750 to +600, according to Rohit Ponnaiya, a betting analyst for Covers.

Those trophy odds rely on the health of Wall, who has not played in the NBA in 14 months, and star Kawhi Leonard, whose 11-month-old rehabilitation from a knee ligament tear has allowed him to progress to the team's liking, though not yet to five-on-five play.

"One of the preeminent handful of top players in the world," Ballmer said of Leonard. "I'm really excited about that. Kawhi's in the gym, he's working and we got our fingers crossed everything keeps going on schedule.

"I think we stay healthy next year we're going to be having a chance to talk way late into the spring season."

Lawrence Frank, the Clippers' top basketball executive, last week called retaining the team's free agents as the top priority, and several of their futures remain unresolved. Forward Nicolas Batum will be one of the team's first meetings Thursday, with both sides working toward finalizing a reunion. Any deal would be facilitated by Batum's early Bird rights, which allows the team to exceed the salary cap to re-sign him. Batum has turned down offers from other contenders each of the past two offseasons to sign with the Clippers, and has described a debt to the organization for helping pull him out of a career-low rut in 2020.

If Wall's pending deal comes from the taxpayer midlevel exception projected to be worth $6.4 million, it will constrain but not eliminate the Clippers' ability to retain backup center Isaiah Hartenstein, whose free-agent value is expected to exceed the midlevel amount, even in a free-agent class deep at his position. Hartenstein felt strongly about his experience with the Clippers after he impressed by making the team as a nonguaranteed invitee to training camp, and with his ability to act as a release valve with his passing.

Other procedural decisions facing the Clippers before a Wednesday deadline include whether to extend qualifying offers to forwards Amir Coffey and Rodney Hood and guards Jay Scrubb and Xavier Moon. If brought back, Moon and Scrubb could be among those competing for one of the team's two two-way contracts, as the current plan is to sign rookie second-round pick Moussa Diabate to the other two-way deal. The 6-foot-10 Diabate was introduced Tuesday alongside Ballmer and Mayor Eric Garcetti.

Diabate is expected to spend much of his development next season in the G League, earning reps to help a self-described "high-energy" player improve as a shot-blocker, rebounder and finisher through contact. He's also expecting to gain experience being around a roster built to win, as Ballmer said, the league's top prize. Diabate sounded like a player who expects at least one free agent to stick around.

"I just met him," he said of Batum, a fellow French export. "He's going to have that role, kind of the big brother type of role. I'm happy."