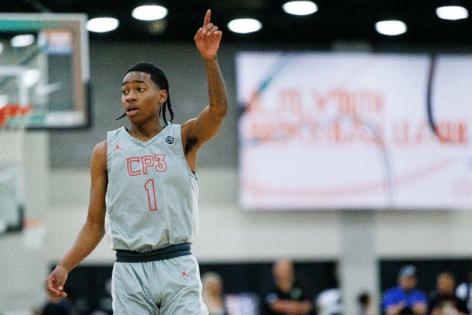 LEXINGTON, Ky. — The second time was the charm for Kentucky and Robert Dillingham, who announced his commitment to the Wildcats on Friday night, presumably ending a recruitment that has already taken a few twists and turns.

Back in the fall, UK hosted Dillingham — a 6-foot-2 guard from Hickory, N.C. — for an official visit, extended a scholarship offer, and looked primed to land his commitment in relatively short order. Then, North Carolina State swooped in with a last-minute flurry and got him instead.

That pledge lasted only a few months, however, with Dillingham reopening the process in mid-March and Kentucky quickly emerging as a possible favorite once again.

On Friday night, the 17-year-old finally committed to the Wildcats.

As of now, Dillingham is the No. 13 overall player in 247Sports’ own rankings for 2023 but slots into the No. 7 spot in the composite rankings. (Rivals.com ranks him No. 6 nationally).

On Friday night, Dillingham picked Kentucky over a list of finalists that also included Auburn, Louisville and Southern Cal, but it was a wild and winding road to get to that point in his recruitment.

Dillingham was the subject of national recognition early in his high school career at Combine Academy (N.C.), a school coached by former North Carolina point guard Jeff McInnis. That connection — along with a scholarship offer from UNC when he was only a sophomore — led to speculation that Dillingham might be an early lean to the home-state Tar Heels.

That narrative fizzled out, and it went away completely with the star recruit’s decision last fall to leave his home state — after earning North Carolina player of the year honors — and transfer to Kanye West’s upstart Donda Academy (Calif.), a brand new prep school program that planned to play a national schedule.

Dillingham’s pledge to N.C. State came a few weeks later, but he was back in the ranks of the uncommitted by the end of his junior season. Kentucky emerged as the favorite over the next few weeks, Dillingham took no additional campus visits during the spring, and by the time he announced his commitment to the Cats on Friday night, it was a decision that was fully expected in recruiting circles.