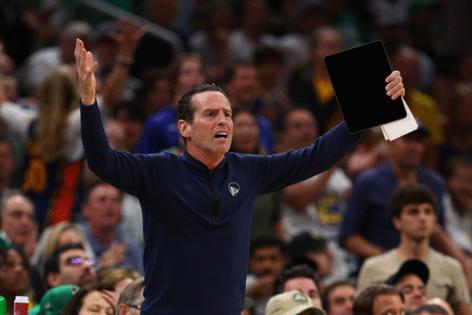 SAN FRANCISCO — Some stunning news broke about Kenny Atkinson in the champagne-soaked hours between the Warriors’ title-sealing win in Boston last week and their championship parade through the streets of this city.

During the Finals, Atkinson had reportedly agreed to become the Charlotte Hornets’ new head coach. Shortly after the Warriors clinched their fourth title in eight years, Atkinson reversed course. He was staying in Golden State as an assistant coach on Steve Kerr’s staff, sliding up to fill associate head coach Mike Brown’s seat after his departure to coach the Kings.

Why did Atkinson, a former head coach with the Brooklyn Nets, decide to stay? Kerr shared his thoughts,

“We’re in a great place, we got great players, we live in a beautiful part of the country, Kenny’s got two kids, teenagers who really wanted to stay, and I think it’s a really difficult thing to try to take a job in the middle of the Finals without really getting a chance to unwind,” Kerr said at the championship parade to NBC Sports Bay Area.

“I’m glad that Kenny trusted his gut, and hopefully Charlotte ends up with a great coach and everybody moves forward. We’re lucky to have him back, especially losing Mike Brown, I need Kenny, and I’m thrilled he’s back.”

In addition, reports indicate the Hornets and Atkinson reached an impasse on bringing in his staff of assistants. Nonetheless, the Warriors are happy to have Atkinson back as a top assistant. Kerr said he “needs” Atkinson, a conduit between Golden State’s growing analytics department and Kerr himself.

“He’s very analytically driven, and I think the particular with analytics is how you apply it to the court, and you have to sort of figure out how to process information and how it can translate to winning basketball games,” Kerr said at Wednesday’s pre-draft press conference.

“It’s not an easy thing to do. There’s so many numbers, and Kenny is one of the rare coaches who really has a great feel for the numbers and how those numbers translate.”

Atkinson has also been involved in helping develop rookie Jonathan Kuminga, Kerr said. But a shift toward analytics-based coaching powered elements of the Warriors’ regular-season run.

Andrew Wiggins’ embrace of catch-and-shoot offense, for example, was fueled by data that showed he was most effective taking more 3-pointers than he had in seasons past with the Minnesota Timberwolves. Paired with his strong defense, Wiggins shot nearly 40% from 3 this season, became an All-Star starter and put on the performance of a lifetime in the playoffs — officially breaking free of the No. 1 pick “bust” label.

The Warriors’ coaching staff boasts a handful of analytics-focused minds such as Jama Mahlalela, who worked closely with Wiggins. Atkinson, like Mahalela, joined the Warriors prior to this season — keeping them both will help the Warriors and Kerr lean more into the numbers.

“We had a pretty homogenous group and they stayed together for quite some time, new voices, someone that’s been in multiple organizations. I’ve only ever worked here, so has Steve,” Myers said. “The people we’ve brought in have worked in other places. That’s really valuable for people like us who have just seen what this (organization) looks like.”

Atkinson coached the Nets in 2019 to their first playoff berth since 2015 and stepped down midseason after Kevin Durant and Kyrie Irving joined the organization. After a year with the Los Angeles Clippers, the Warriors brought him on, seeking the strong outside perspective a former head coach can provide.

“We don’t do everything perfectly, so it’s always nice to find someone like Kenny who was a head coach but coached in many other places underneath some good coaches and approaches things differently,” Myers said. “I think we realized when we hired him last year we needed some new voices, and Kenny is not reticent, so he will say what’s on his mind, and we value that.”