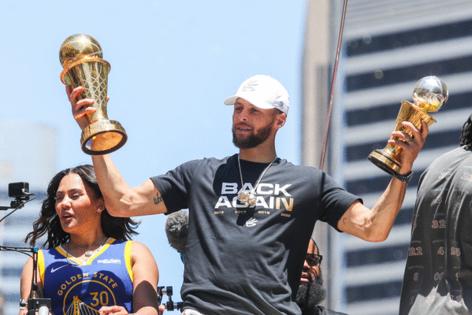 Stephen Curry has it all.

He won the Most Valuable Player of the NBA Finals, the trophy thought by some to be the final piece in his legacy.

In the Bay Area, we’ve seen some pretty amazing performances with a championship on the line. You could make the argument that Curry’s performance against the Boston Celtics vaults him right to the top of those who went above and beyond the call when it mattered most.

Having worked in the business for 40 years, I’ll place Curry at No. 3 on my mythical “Mount Clutchmore” alongside three others whose heroics throughout the postseason was cause for parades from a delirious fan base.

Here’s how they rank:

The mere sight of Bumgarner striding to the mound in the fifth inning of Game 7 against the Kansas City Royals was unparalleled high drama. Then he proceeded to shut down the Royals for five innings on just two days’ rest and even survived an outfield misplay with two outs in the ninth.

When Bumgarner got Salvador Perez on a foul pop to third baseman Pablo Sandoval, he completed a five-inning save, giving up just two hits. Having beaten the Royals twice in the series, Bumgarner was World Series MVP.

If that’s not enough, Bumgarner was also the MVP of the National League Championship Series against the St. Louis Cardinals and kicked off the Giants’ postseason run with a complete-game win in Pittsburgh in the one-and-done wild-card game.

Bumgarner’s final postseason line: A 4-1 record with one unforgettable save and 1.04 earned run average over 52 innings, giving up 45 hits with six walks and 45 strikeouts.