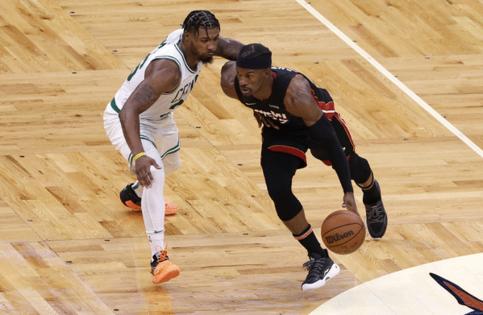 BOSTON — It was a night that was going to leave the Miami Heat at a loss, regardless of the outcome, with Jimmy Butler’s night done at halftime due to knee inflammation.

But that also is where the Heat held the line, riding the aggression of center Bam Adebayo to a harrowing 109-103 victory Saturday night over the Boston Celtics at TD Garden and a 2-1 lead in the best-of-seven Eastern Conference finals.

On the rare night when the Heat started whole, with point guard Kyle Lowry back from his hamstring strain and power forward back P.J. Tucker from a knee issue, the Heat soon had to find a way to finish in the absence of their scoring leader.

So Adebayo became their scoring leader, closing with 31 points and 10 rebounds, after scoring a combined 16 in the series’ first two games, including a key late jumper.

With Lowry providing stability in his return and Tucker aggression, the Heat rode a variety of complementary contributions on both ends, including a key late Max Strus 3-pointer, on the way to regaining homecourt advantage.

— 1. Closing time: The Heat led 39-18 at the end of the opening period, their scoring high for any quarter this postseason, pushing that lead to 26 in the second period, before taking a 62-47 lead into the intermission.