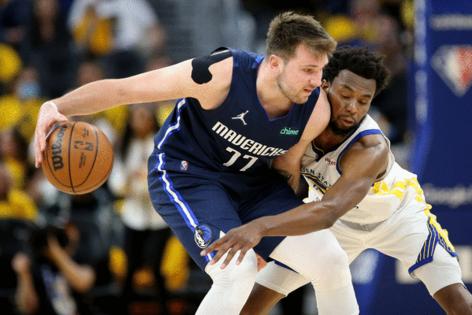 DALLAS — Andrew Wiggins is listed as questionable for Game 3 of the Western Conference finals with ankle soreness, but Warriors coach Steve Kerr is certain the 27-year-old forward will play on Sunday night.

How can Kerr be so sure?

Following a team workout in Dallas Saturday, Kerr said Warriors vice president of communications Raymond Ridder had to inform him of Wiggins’ official injury designation before the coach met with reporters.

“To be honest, I didn’t know he was hurt until Raymond just told me he was questionable,” Kerr admitted.

Wiggins has enjoyed a breakout postseason and has been tasked with the ultra-important assignment of being the Warriors’ primary defender against Mavericks star Luka Dončić.

Kerr couldn’t pinpoint a specific play on which Wiggins felt pain in his ankle, but indicated the injury designation won’t preclude the forward from keeping his spot in the starting lineup and maintaining his regular minutes in the Warriors’ rotations.

Despite Wiggins’ impressive full-court man-to-man defense, Dončić is still averaging 31 points per game and shooting 44% from the field, but turned in a playoff career-worst 16.7% on contested field goal attempts in the Warriors’ Game 1 win on Wednesday.

Wiggins has also been an efficient scorer, particularly from 3-point range where he is shooting 46% on 6.5 attempts per game. The Warriors have outscored their opponents by a team-leading 44 points in total with Wiggins on the floor in the first two games of the Western Conference finals — a plus-22 on average per game. He also has a team-leading plus-100 in all 13 playoff games Golden State played thus far.

The Warriors’ All-Star has not missed a playoff game this year and missed just nine games during the regular season, most of which came when he was in health and safety protocols in December.

Moody likely to return to rotation in Game 3

After guard Damion Lee turned in five abysmal second-quarter minutes that featured two missed shots and a technical foul during Game 2 on Friday, Kerr chose to keep Lee on the bench at the start of the fourth quarter.

Lee typically enters to give Steph Curry and Klay Thompson a breather, but Kerr opted to insert 19-year-old rookie Moses Moody into the lineup. With 10 turnover-free minutes during an impressive stretch against the Mavericks, Kerr said Moody is again an option off the bench in Game 3.

“(Moody) is just a very solid player, knows where to be on the floor, isn’t afraid to make a play, but also understands when not to make a play which is important,” Kerr said. “He’s got good size and physicality defensively and he’s a player who can survive a series like this where there’s a lot of pick and roll and a lot of switching.”